Samuel Sultana is a 23-year-old French/ Maltese bi-national creative, enthralled by the cacophony known as the ‘world of art’ at a very young age. 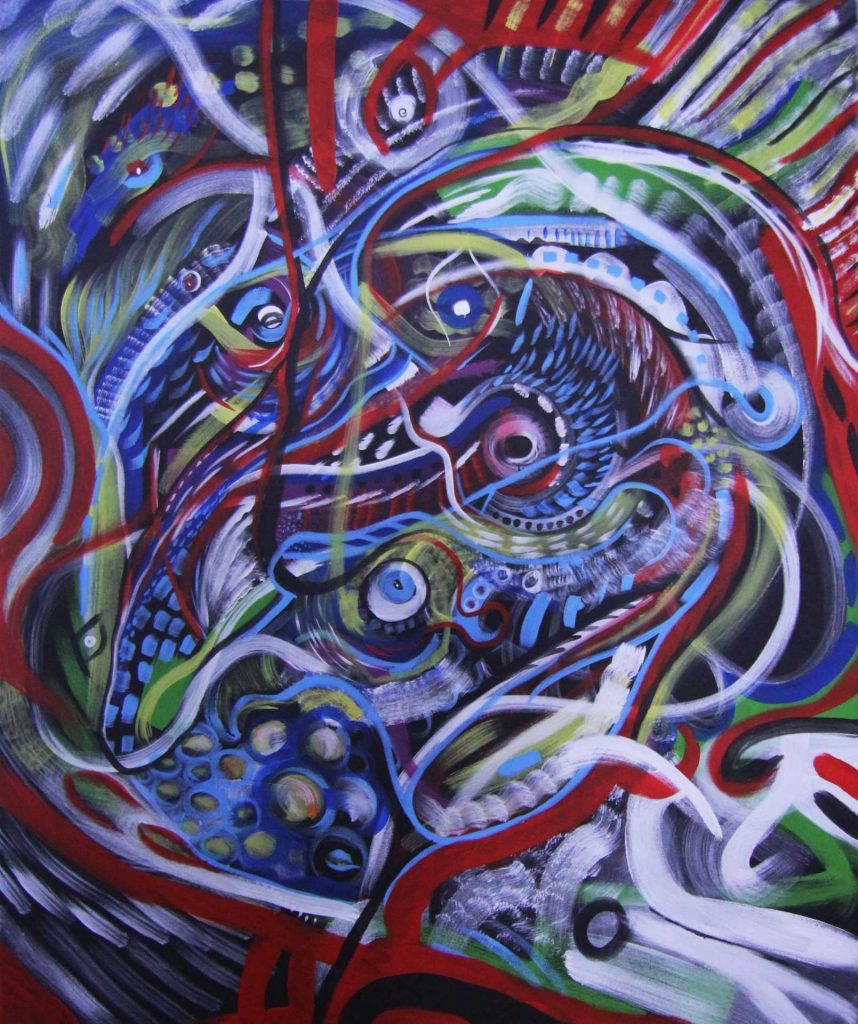 Samuel’s choices and experiences cultivated a strong vision, producing what he calls ‘blueprints, maps and remnants of this meditation’ which he aims to communicate with the audience, through his canvas works, which, upon selling, means to him that a person wishes to own a piece of that experience and indirectly, a piece of him. Everything tends to affect and inspire Samuel, some things more consciously than others. Occasionally experiences seem to slide by, and then years after re-appear in his work, along with a deeper understanding which he digests and assimilates subconsciously. He doesn’t wait for inspiration as he finds peeks of inspiration occurring during the process, which he manages to capture straight away although spirituality, the cosmos and death lie at the epitome of his investigation.

Building on the initial introduction to art through his mother, he was later apprenticed by the local artist Rupert Cefai who gave him the broadest education he hoped for. Seeking to further his education in the UK (at Kingston University, London, for his first degree and at the University for the Creative Arts, Canterbury, for his Masters in Fine Arts) came after much conversations with numerous artists and creatives, and hard work. His studies ‘’ turned out to be a great liberating experience, where I was given immense freedom in a peaceful atmosphere, with excellent guidance from tutors. By the end of this tremendous exploration I had gained a great deal of insight and momentum.’’ Life was not always easy for him following his move to Bristol after completing his studies. Together with four other creatives, now evolved into the group Izaxa which he still works with, he left this stability in order to start a fresh life in art. Bristol offered him the opportunity to be hosted in a number of shows and exhibitions in galleries where he would sell work, keeping him afloat financially but also the down side of times when they resorted to the local Soup Kitchen for survival. The stressful, everyday life issues that took over the focus he wished to dedicate to his work on was among the reasons for his move back to Malta, a long term calculated strategy for what he considers to be success.

Samuel is currently working on various projects which include collaboration in a short movie, creating more paintings for his ‘Fluxus’ Collection, which he plans to show at St. James Cavalier Centre for Creativity, creating artworks to send to Paris and launching a private lessons program at his new studio in Zebbug. As a member of the group ‘Izaxa’, a group of six stemming from different backgrounds, ranging from fine arts, audio and photography to engineering and computer programming, a marriage of practices he finds allows for a multidimensional approach to different concepts and problems otherwise out of reach of any one individual member. Together they formed part of the ‘Divergent Thinkers 2013’ exhibition at St. James Cavalier Centre for Creativity and are currently working on three separate projects which include one at St. John the Baptist Church in Bristol and possibly with Ziguzajg 2014 and Science in the City 2014. Working over different platforms allows him to be broader in his conception and approach, which allows him to cross over the knowledge gained from different contexts.

Samuel‘s current muse is his pigeon ‘Little Miss’ who was offered to him when she was very little and he gets to see evolve from a totally dependent atrophied ball of yellow fluff into a graceful, free flying machine. You can view his works at Christine X Art Gallery, www.samuelsultana.com and www.izaxa.com.

Watch footie wherever you are

The enigmatic work of Adrian Abela