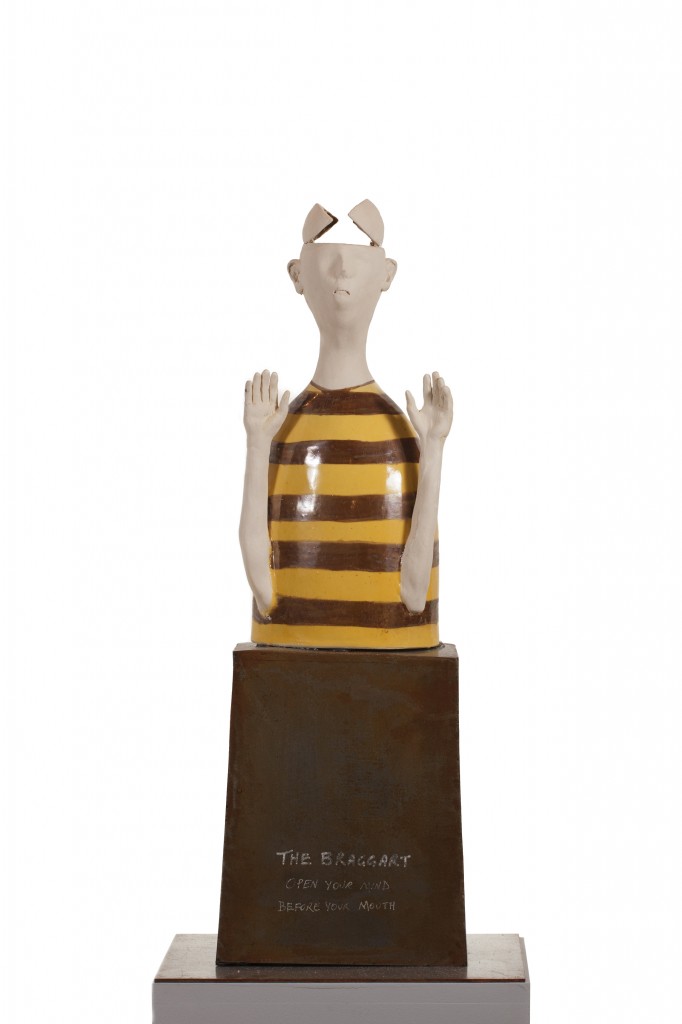 Paul Scerri’s work usually starts with a preconceived idea, always revealing the truth in terms of attitude and behaviour of certain people, particularly where injustice and narcissism is concerned.

He expresses certain elements with symbols and metaphors that he learnt through his own experience towards humanity. Paul explains how he prepares his own clay body, and when working on the build-up of the sculpture, he uses the coiling technique, working in stages, so that the clay holds itself and hardens.At this point, he carves away the necessary details.

Each piece is biscuit fired, at circa 1100°C, before the glazing, which would vary from pouring to spraying, taken from his own recipes. Glost firing is at a low temperature so that they just harden and allow other applications, sometimes re-firing three to four times. When precious metals are applied, they are fired at 860°C in a local reduction, always using a gas burning kiln.

Paul’s artistic journey started with his studies, under the late Chev. Esprit Barthet, at the School of Arts in Valletta. This was then followed by ceramics and life studies courses at the Accademia di Belle Arti Pietro Vanucci in Perugia, followed by the Istituto Statale D’Arte G. Ballardini in Faenza, and ceramic tile design and decoration in Imola. Discipline, technology and respect toward the material were amongst his greatest learning achievements. At the Comune Municipale in Faenza, he was awarded with first prize in Ceramics in the “1o Concorso Avis”.

On his return to Malta, he took to teaching and adapted all that he learnt from the ceramic courses to teaching the local community at the Art and Design Centre in Valletta for about four years.  As was the case with most artists who taught art for a living, teaching alone did not feel like enough and he wanted to widen his horizons. For Paul, it was the private sector that interested him and he started working in the ceramic manufacturing industry, taking responsibility for the design and technology. The chemistry of ceramics is quite complex and in the tile manufacturing industry, one needs to be accurate as surprises during the firing process is unacceptable.

Decoration is the most difficult part of ceramics as it enhances or ruins the sculpture, thus, working in this sector has given him the discipline he needed in order to refrain from the unnecessary ‘accidents’. This did not stop him from continuing his studies and updating his knowledge in the field. He has regularly attended various workshops in Spain and Italy. He now holds the position of a part-time lecturer in ceramics at the Faculty of Education within the University of Malta. Furthermore, his exhibitions in Italy and locally, date back to 1985.

Paul Scerri invites you to see some of his artworks at Marie Gallery 5 and encourages you to interpret the portrayal of his sculptures, which are products of his imagination, gained through his own experiences with human nature. Paul also has his own Facebook page under the heading of ‘Paul Scerri Ceramics’ and website www. paulscerri.com.

The glorious work of Goran Cejkov