Last month, thousands of satellites were launched into space as part of long-term plans to create a satellite Internet fleet that could provide connectivity to antenna receivers all over the Earth’s surface. Moving in constant motion around the globe, the fleet could conceivably provide global Internet coverage at all times – theoretically offering Wi-Fi to the entirety of planet Earth.

In the Western world in 2019, few spaces remain without constant Wi-Fi access or 3G, one of them being Green Bank – a town in America with a population of approximately 200 people, nestled in the Appalachian Mountain Range in the Pocahontas County of West
Virginia. 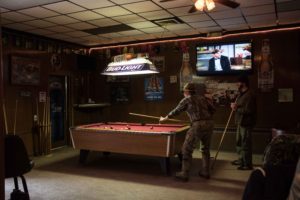 Green Bank is home to the world’s largest fully steerable radio telescope and lies in the heart of America’s National Quiet Zone, a large area of land in which radio transmissions are heavily restricted by law to facilitate the scientific research carried out by the radio telescope and its associated observatory. Inhabitants of Green Bank are expected to live as radio-silently as possible, avoiding operating devices that use transmissions which could cause interference with the radio telescope’s space exploratory work. Mobile phones, wireless headphones, Bluetooth devices, microwave ovens, remote controls, or anything that uses signals capable of interrupting the work of the Green Bank telescope is meticulously regulated. Internet connectivity is also limited.

The context of Green Bank is unique – scientists from around the globe travel to its remote location to partake in the enduring quest to connect to the universe beyond our planet; others have moved to the town to escape the bombardment of technology and fast-paced lifestyles. Conversely, Green Bank’s youth population is consistently thinning out; with limited connectivity making the launch of business difficult, young people leave to pursue greener career pastures. Yet Green Bank’s distinct sense of community is persistent and strong, extending to the entire county of Pocahontas – it is an attribute that may be considered rare in contemporary times.

The Spaces That Connect Us is a photographic and text-based case study by photographer Joanna Demarco and writer Ann Dingli of life in Green Bank and its neighbouring towns, carried out between 2018 and 2019. It explores the diverse polarities between connection and disconnection, aloneness and togetherness.

By observing the lives and experiences of individuals and groups who live in a space without constant Internet connection, the creators of the exhibition hope to create a platform that engenders conversation and reflection on humanity’s ubiquitous use of communication technologies. It also begins to question what price we pay for constant connection, and what is at stake for communities such as that of Pocahontas County when it becomes their reality too.

The Spaces That Connect Us will be showing at Valletta Contemporary, Valletta between July 26 and August 9, 2019. The exhibition is supported by the U.S Embassy. This project was supported by Arts Council Malta – Research Support Grant. The photographs of the exhibition are also sponsored by ILab Photo.

The Malta Craft Beer Festival is back