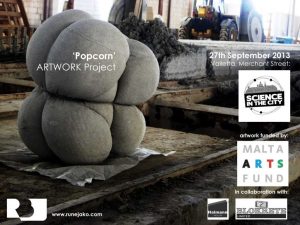 The ‘Popcorn’ Public Artwork Project by Rune Bo Jakobsen is one of the science-based street art installations that will be featured on Friday 27th September as part of Science in the City festival. The installation will be displayed in front of the Auberge d’Italie, Merchants Street, Valletta.

“The intention is to bring art out of the museum and directly into the street where the public can touch and ponder. The concept of the ‘Popcorn’ sculpture defines expansion and fertility,” explained architect and artist Rune Bo Jakobsen.

The idea is to create an expanding volume using an experimental concrete casting technique where the concrete takes the shape of a textile form. The shape and texture of the sculpture is dictated by the forces and pressures between the flexible skin and the liquid concrete.

At the collaborating Blokrete Ltd factory, experimental casts have been expanded to an industrial scale gradually arriving to a 1m diameter and reaching two tonnes. The forces of the liquid concrete become much stronger, subjecting the materials and sculptural method to tougher tests. Expressive tension lines and folds are fossilized in the concrete as if the expansion were frozen in time.

While using industrial materials, the convex shapes are reminiscent of the Maltese Neolithic goddess of fertility.  Some casts also contain concave voids, where the sculpture also becomes an introvert space — an opened seed or a womb.

During the Science in the City festival, the ‘Popcorn’ sculpture will be accompanied in Merchant Street by a workshop; where University students Emily Sammut (Department of Food Studies and Environmental Health) and Karl Montebello (Department of Applied Biomedical Science) will be demonstrating the science and nutrition of popcorn. Collaborating in the production of the sculpture, chemist, Alistair Buttigieg of Halmann Vella will visualise technologies behind expanding aerated concrete. After a bit of learning, a popmachine will be making free popcorn to try.

Rune Bo Jakobsen, www.runejako.com, has studied, worked and tutored workshops in Denmark, Arizona, Italy, Finland, Greece, Mexico and Malta. Working as an architect by day and artist by night, he has been awarded Malta Arts Funds for ‘Popcorn’.

‘Science in the City’ forms part of the pan-European Researchers’ Night held annually, aiming to enhance public recognition of researchers and their work, and providing a platform for adults and children alike to creatively engage with science in a more entertaining way.

The programme can be downloaded from www.scienceinthecity.org.mt or festival updates followed on Facebook at: www.facebook.com/ScienceInTheCityMalta

Next Article
0
Monique Chambers September 16, 2013
No Comments Yet