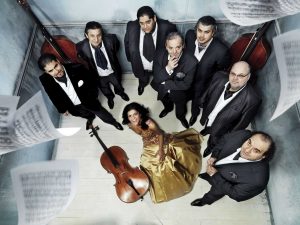 The 2013-2014 performance season at Teatru Manoel starts on Tuesday 24th September with an exciting show by the “Gypsy Devils”. This is a departure from the traditional opening season classical concerts and in the words of Teatru Manoel’s CEO, Ray Attard, “The cocktail of different genres of music which the Gypsy Devils perform in their distinctive style reflects the eclectic programme in place for the rest of this season.”

The “Gypsy Devils” is one of the the best world ensembles in the category of Ethno and World Music. Made up of eight unique musicians, they have a worldwide following having performed on all five continents and in 35 countries. They skilfully combine Classical, Jazz, Ethno, Flamenco and Gypsy music with extraordinary virtuosity. A truly fantastic start to the theatre season!

More than 100 different events (over nine months) make up Teatru Manoel’s 2013-2014 season. These include orchestral concerts, recitals, dance shows, the annual pantomime, musicals and plays in English and Maltese including two new plays presented as part of the Staġun tat-Teatru Malti. The Toi Toi Education Programme also enters its third season with additional concerts for children, pre-concert talks and “limited edition” events which  are one-off opportunities to meet visiting artists. Returning this season is the “Mid-Dinja tat-Teatru” series produced jointly by Teatru Manoel and MCCA in which audiences gain a historical perspective of Maltese theatre through interviews with protagonists of the Maltese stage.

Major highlights include an original production of Mozart’s opera “La Clemenza di Tito” with a predominantly all-Maltese cast led by Cliff Zammit Stevens in the title role in March 2014 and the second edition of the Valletta International Baroque Festival which comprises 25 different events over 17 days in January 2014 in various venues in Valletta.

Prices remain unchanged from last year and for nearly all the shows a fifty per cent discount is offered to senior citizens, full-time students and under twenty-fives on selected seats. The Theatre also accepts the Culture Card.

Information on all events can be found on the Theatre’s website: www.teatrumanoel.com.mt