Elegant supermodels of the late eighties and early nineties have always fascinated me, and although powerhouses like Cindy Crawford, Claudia Schiffer and Linda Evangelista are names I’ve grow up, there’s one lesser-known supermodel that has recently become my current muse.

Early nineties fashion spawned some of the best runway looks of all time, and today’s fashion designers are harping back to that golden age for inspiration. Take the Versace sea creatures motif dress seen everywhere this year, hot off the Versace S/S 2021 collection and seen on the likes of starlets from Dua Lipa to Emily Ratajkowski. The dress is a direct homage to Gianni Versace’s 1992 collection Trésors De La Mer, an iconic collection, and one which a certain Yasmeen Ghauri rocked, wearing the original version of the “starfish dress”.

Yasmeen Ghauri may well be a lesser-known name, but she has modeled for just about every huge fashion designer imaginable in the 1990s. We’re talking all the big guns, Chanel, Valentino, YSL and of course, Versace. The stunning Canadian model opitimizes the glossy, leggy look of the of the supermodel era. Her physique and runway walk are the stuff of legend, back in a time when fashion was glamorous, fun and oh so sexy. Her rise to supermodel stardom is an interesting one, and one I only learned of until recently.

Yasmeen Ghauri was born to a German mother and Pakistani father in Montreal in 1971. She was brought up Muslim, and had a difficult childhood, due to being bullied for her different heritage by her classmates. Things changed for Yasmeen when she was discovered whilst working at McDonald’s at the age of seventeen by the artistic director of Platine Coiffure, hairdresser Edward Zaccaria  (yes, it really does happen!). Her parents were opposed to her perusing a career in fashion, but soon enough, Yasmeen was jetting off around the world premiering in Milan and Paris before moving to New York in 1990.

Yasmeen Ghauri didn’t look like the other models with their predominantly “Nordic Look”. Her presence helped shake up the diversity in the fashion industry, helping to inspire a trend for more “exotic” looking models at the time, just as trailblazing titans Naomi Campbell, Tyra Banks and Beverly Peele paved the way for black high-fashion models.

Yasmeen Ghauri graced the covers and pages of Vogue, Elle, Cosmo and countless other magazine editorials. Iconic fashion photographer Patrick Demarchelier, who photographed her for the Italian issue of Vogue called her his favourite subject – now that’s something to write home about! She’s been the face of Chanel, Lanvin, Valentino, Versace, Christian Dior, Anne Klein and Jim Sander (phew!). In February 1992, she walked the controversial Gianni Versace Bondage show in Milan, and in the same year landed a contract with Victoria’s Secret.

Yasmeen left the modelsphere in the mid-nineties, retiring to start a family with her husband, lawyer Ralph Bernstein. They have a daughter called Maia and nowadays, Yasmeen Ghauri Bernstein is involved in multiple fundraising projects.

Summer is well and truly in full swing, (can you feel the heat?!), and Yasmeen Ghauri can teach us all a few things about looking fashionable whilst catching some rays. Here are just a handful of styling suggestions to spice up your swimwear, inspired by Yasmeen’s high-fashion heyday! 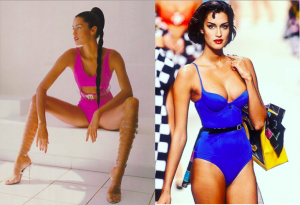 Trust us, you’ll be seeing 90s style chain belts poolside just about everywhere this summer! As well as all sorts of shimmery metal links, the trusty leather or PVC belt adds a touch of nineties cool to a one-piece. Try it out with a skinny belt you wouldn’t mind getting splashed in. 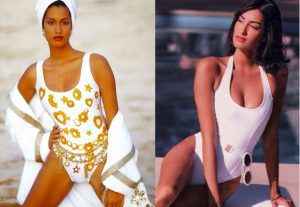 There’s no colour that offsets a deep tan like Yasmeen’s quite like bright white. If you’ve never owned white swimwear, this is your sign to make the leap. A white swimsuit just screams La Dolce Vita. (Note the charm chain belt and white sunnies for extra accessories inspo!) 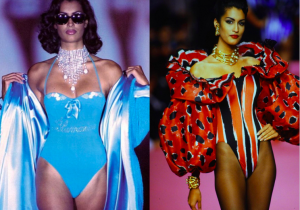 Jewellery to the pool? Are you mad?! Nope, just bang on trend! We’re not suggesting digging out your family heirlooms, but a little costume jewellery never hurt anyone. Loud colourful earrings or even an oversized necklace work wonders on polishing up last year’s swimwear. 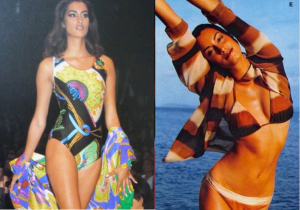 If the 1970s were all about kaftans, then the 1990s were definitely all about the shirt when it comes to covering up by the pool, beach or deck. Yasmeen is seen here in matching shirts to her swimwear, but we do like a crisp white or stripy number over a bikini when we see one. Très chic. 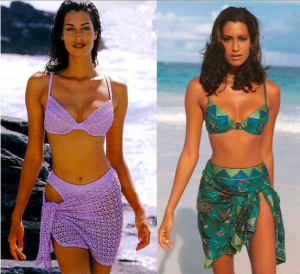 Ah, the pareo! Whatever happened to this little seaside number? They were just about everywhere all through the nineties. Luckily, luxe resort wear labels such as Rat & Boa are bringing them back in a big way, but we’ll let you in on a secret – the best ones we’ve seen have been oversized vintage scarves from charity shops!