Can you imagine what it feels like to just stop and do nothing? To be without a phone and unable to pass the time, or without a watch and have no clue what the time is?

Well, I, for one, couldn’t: at least not until I entered the space of Marina Abramović’s performance in London.

Within the bright white rooms of the Serpentine Gallery, Abramović has, since June 11th, been cultivating a communal space for all those who enter to do nothing but be in the here and now of that moment – a feat which is impossible to achieve while we’re looking at our watches and thinking ahead or communicating with those who aren’t anywhere close to us over the internet.

Sound daunting enough yet? Imagine doing it for a total of 512 hours, the duration which gave the performance its name.

The brainchild of a woman born to two very disciplined ex-Yugoslav parents, 512 Hours is but the latest of Abramović’s work that has, yet again, stirred the art world, as well as anyone who ventures into that space, into a state of mind that questions precisely the life that we now live.

To be perfectly honest, I had no idea what to expect out of this performance. Sure, I knew that Abramović, at 64, boasts a portfolio of long-durational performances that challenge the limits of contemporary human nature, whether bodily, mentally and/or spiritually. I also knew that her previous work, The Artist is Present, was monumental for the world of performance art: by getting individuals from the audience to sit across her, just to have them connected to her in the same time and space, she, as the artist, was not hidden away behind a screen or canvas, but truly present as part of the artwork – just as much as the audience.

But 512 Hours? In concept, it is the sequel to The Artist is Present, because presence remained central to both, but its context and execution resonated with people, myself included, in a different way. 512 Hours veers in a more personal direction, somehow, even within the pulsating open-plan of three rooms. People simply sat in peace for hours on end, at times just feeling the tips of their toes brush against the sole of their shoe and then rest along the sturdy surface of the floor, or, somewhat absurdly at first, walk slowly in reverse, testing their perspective, with a mirror in hand. Marina herself was softly padding around the rooms, placing her hand on someone’s shoulder and holding their hand, until she steered them onto a chair, where she whispered simple, but endearing instructions to comfort and help them on.

The simplicity of all this rattled me – especially the first time. After I stashed my belongings into a locker, I went in, thinking I was prepared for it, only to realise that it’s not something you can prepare for, regardless of how much you may have read and written about these things, because it’s only the experience of being in the moment that matters.

Simply adjusting to the idea of doing nothing but be while you are in that those three rooms can be terribly nervewrecking. I felt so frustrated by the fact that my brain just wouldn’t stop buzzing and leave me alone that I was about to up and leave, but I didn’t want to give in. So I stayed, sitting down in the middle of a room, just doing nothing. As I started to slowly adjust, all the sensations that I felt throughout what essentially became a self-reflective exercise – the frustration, the anger, the disappointment that I felt as I realised that my body and mind just aren’t programmed to do nothing – started to dissipate into nothing, and everything was bright and clear, even if just for a while.

Taken by the sheer intensity of the experience, I went back the following day, and when I walked out into the park right beside the Gallery, I couldn’t remember the last time I felt as good and refreshed. It was as if I’d just woken up from a terribly overdue good night’s sleep.

I’m already hankering to go back the third time.

Marina Abramović’s performance is open until August 25th, at the Serpentine Galleries in London. Entrance is free. 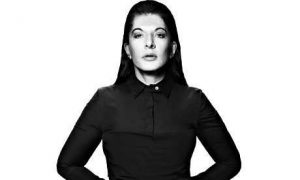 Next Article
0
Monique Chambers June 30, 2014
No Comments Yet