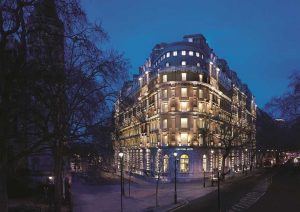 Five-star Corinthia Hotel London launches its third national call for an Artist in Residence, this time with a spotlight on supporting filmmaking talent. The Artist in Residence Programme is an annual initiative that champions British-nurtured talent within different disciplines of the arts.

This year the theme is ‘The Power of Sleep’, the winner/winners will reside at the hotel for a month and be given a £15,000 budget to make a short film to be launched in early May 2014.

Matthew Dixon, Corinthia London General Manager says:  “Our Artist in Residence Programme was born out of our commitment to support rising British talent, situated as we are at the crossroads of some of Britain’s best-loved cultural institutions. We hope the rich theme of ‘The Power of Sleep’ will intrigue filmmakers.”

Last year the winning Artist in Residence was theatre company, Look Left Look Right, who created an immersive play drawing on the hotel’s history and interviews with the staff. “Above & Beyond” lasted 70 minutes across 30 spaces within and around the hotel, and ran for 5 weeks while the hotel was fully operational. The play was open to the general public, tickets sold out within the first week, and the play was extended by an extra week.

The 2011-2012 Residency saw artist Noémie Goudal create large-scale works of art while resident and for display at Corinthia London.  These works, using Corinthia Hotel London as their starting point, transported viewers to other worlds.

For more information or to enter the Artist in Residence Programme please visit corinthia-air.com

Beyond the Moon Sponsor Ambassador raises €15,000 for Children’s Charity