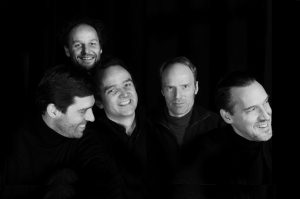 On Tuesday 12th November at 8pm Teatru Manoel presents Het Collectief, Belgium’s leading chamber ensemble in a recital which journeys from 1938 to today with music by Béla Bartók, Ruben Zahra and Olivier Messiaen.

Over the years  Het Collectief has gathered  international acclaim for its refreshing interpretations of 20th century chamber music.  For its Maltese public, the Brussels ensemble has selected two very special masterworks from that fascinating repertoire; Bartók’s “Contrasts” and Messiaen’s “Quartet for the End of Time”.The Hungarian Béla Bartók composed his “Contrasts” for a concert with two of his best friends: his compatriot and star violinist Joseph Szigeti and the American jazz clarinettist Benny Goodman. The result is an intriguing mix of Hungarian folklore and Dixieland jazz.

The programme is chiefly devoted to the “Quartet for the End of Time”. The French composer Olivier Messiaen (1908-1992) wrote his ‘apocalyptic vision’ in 1941, when he was a war prisoner in the detention camp Stalag IV in Silesia. Devastated by the horrors of the Second World War and inspired by the Apocalypse from the New Testament,   Messiaen gave an overwhelming  expression to his catholic faith in this piece.  Using a number of ingenious composing techniques, he achieved a musical translation of the notion of ‘eternity’. This shows from his original palette of timbres and harmonies, but equally from his self-created rhythmical language which, in combination with the sometimes extremely slow tempi, manipulates the perception of time.

To round off the programme of French and Hungarian music, Het Collectief are delighted to perform “PAN the Goat-God” by Maltese composer Ruben Zahra. The music for this cycle, set in four movements, is driven by hard rhythmic patterns which support complex motives and intricate melodic lines. The composition is also characterised by aggressive contrasts within the same movement which often surprise the listener as the music jolts forward in leaps and bounds.

Het Collectief was founded in 1998 in Brussels. It has created an intriguing and idiosyncratic sound, achieved by an unfamiliar mix of strings, wind instruments and piano. The group also creates a furore with daring crossovers between contemporary and traditional compositions and with adaptations of ancient music.

There is a pre-concert talk for ticket holders at 7.15pm and tickets can be purchased online at www.teatrumanoel.com.mt  by email bookings@teatrumanoel.com.mt or telephone 2124 6389. There is a 50% discount for students, under 25s and kartanzjan holders on selected tickets and primary school children go free.

Simon Rogan will take the helm at Claridge’s new restaurant when it opens in Spring 2014.

0
Monique Chambers November 6, 2013
No Comments Yet