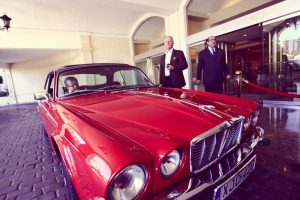 The Corinthia Palace Hotel and Spa in Attard has officially kick-started the hotel’s sponsorship of the highly-anticipated Mdina Grand Prix by welcoming many of the event’s future participants.

The cars zoomed up to the hotel on their weekly outing, so their drivers could enjoy a cool drink in the sunshine.

“Our Sunday spin is a regular ritual for us,” explains Ivan Bartolo, the public relations representative for the Mdina Grand Prix. “So, last week we decided to spend some time at the Corinthia Palace so as to thank them for the incredible support they have given us so far. We plan to return very regularly now, especially as we all had such a great time on Sunday.

Last weekend’s outing also marked the launch of the Mdina Grand Prix’s official brochure for this year, which will be used to promote the event in the months to come.

David Woodward, the Corinthia Palace Hotel and Spa’s general manager, was also presented with the first ‘paddock pass’ of the year, which will give him full access to enjoy the Grand Prix’s ‘backstage’ area throughout the event come October.

“There are still a few months to go until the this wonderful event kicks off in earnest, but already we are so excited to be part of it,” says Mr Woodward. “It was fantastic to welcome so many members of the team to our hotel last weekend, and we look forward to seeing them again very soon.”

Next Article
0
Monique Chambers February 18, 2014
No Comments Yet

Corinthia Raise Thousands for Beyond The Moon