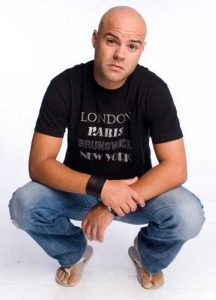 The Eden Comedy Club will be hosting its 9th Stand Up Comedy Night on Friday 9th May at 8:30pm. Taking place in Eden Cinemas’ multipurpose theatre, the Eden Comedy Club flies over the best in stand-up comedy, from the UK comedy circuit. Long established by its bold and witty comedians from across the globe, audiences are in for an evening of hysterics with the outrageously funny performances we have in store!

The line-up for the night will feature top-notch acts that have made names for themselves both in the UK and internationally. Headlining is the talented award-winning comedian Mark Maier. Well established; Mark has performed at The Comedy Store in Los Angeles and has also taught and performed with the incredible Catherine Tate; you may also have heard Maier in a number of South Park episodes! Also performing on the night is the incredible Johnny Kats, a dynamic and energetic performer with an arsenal of impersonations. Having been awarded first prize in ‘So you think you’re funny’, Kats was then given the opportunity to support Dave Chappelle at the Boston Comedy Club in New York City. The third act is the unique and quirky Laura Lexx whose boundless energy and overflowing stage presence will have the entire crowd giggling away. Having performed at the ‘Edinburgh Fringe Festival’ and ‘What The Frock!’, it is clear that Laura is definitely a born entertainer. Last but not least is our MC for the night, Ro Campbell who was recently named ‘Scottish Comedian of the Year’. Known for his upbeat energy, Campbell is sure to have the audience laughing uncontrollably throughout the entire night!

Staying true to our club motto: ‘Entertain, Engage and Share the Laughter’, the Eden Comedy Club promises to deliver an unforgettable show for all comedy-lovers out there! Join us for a brilliant night featuring some of the best comedic acts, together bar offers and ample parking at the Eden Car Park. Happening on a Friday night, the Eden Comedy show is the perfect excuse to unwind for the weekend!

Early bird tickets will be available for a limited time only for just €15 – 25% off the full price.

This event is sponsored by Heineken and supported by 89.7 Bay and Waterbiscuit

For more information or to purchase your tickets visit www.edenculture.com.mt