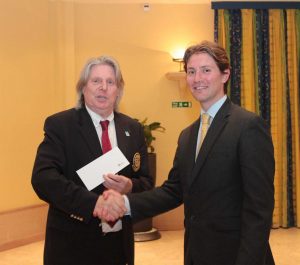 Just under €3,000 was recently raised through the charity screening of the documentary ‘The Triumph’ at the Eden Cinemas. This initiative was possible thanks to the involvement of Mr. Mark Rizzo and David and Ursula West who sourced the Documentary, and Eden Cinemas who made cinema 16 available. The proceeds were donated to Rotary Malta, whom Bay Kids is partnering with this year, and will go towards the funding of a children’s school in Uganda.

The Triumph is a powerful new documentary film set in a tiny village in Bosnia-Herzegovina and based on the Medjugorje apparitions that is filling theaters throughout the world. On the 27th March, over 630 people attended the Charity Screening at the Eden Cinemas, no admission fee was charged but all offered a donation which was collected.

Mr Simon De Cesare, Director of Operations of Eden Leisure Group, passed on all the proceeds to Rotary Club Malta. Mr. De Cesare stated, ‘We are extremely happy that we have been able to raise this money to go towards this worthwhile project in Uganda. Rotary Malta is raising some €60,000 to fund a primary school on Lake Victoria. The school will be managed by the NGO Kids of Africa on behalf of the local community who have no educational institutions in their village.’

School's out for Summer

Moveo will move you