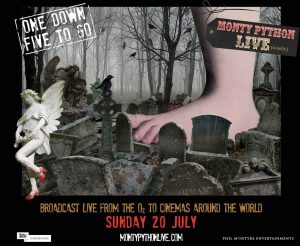 Broadcast in over 450 cinemas in the UK and a further 1,500 worldwide, the final show of ‘The Last Night of Monty Python,’ will be showing in Eden Cinemas’ multipurpose theatre on Sunday 20th July at 8pm. Live via Satellite from London’s O2 Arena, the show brings together the five remaining members – John Cleese, Terry Gilliam, Eric Idle, Terry Jones and Michael Palin for a final reunion which promises to be one of the biggest and funniest events of the year.

“Thanks to the wonderful invention of moving pictures, ‘The Last Night of Monty Python’ is coming to a cinema near you,” the Pythons said in a statement. “Get your knotted handkerchiefs out and warm your brains one last time.”

Directed by Aubrey Powell and produced by Fiz Oliver, the Monty Python live stage show will include the group’s most memorable skits, all new sketches as well as their trademark quirky humour. With tickets for the first show having sold out in 43.5 seconds, the event has been extremely well received by fans, partially due to the fact that this will be the Pythons first live UK gig in over 40 years.

Monty Python received international acclaim after the airing of ‘Monty Python’s Flying Circus’, a BBC comedy sketch show which was first aired in 1969. The troupe went on to make the films ‘Monty Python and the Holy Grail’ and ‘Life of Brian’ in the 70s, as well as ‘The Meaning of Life’ in 1983, all of which continued to highlight their revolutionising brand of comedy.

Tickets for the live show are priced at €12 and can be purchased from www.edencinemas.com.mt

AZIAMENDI IN VALLETTA FOR 100 NIGHTS.