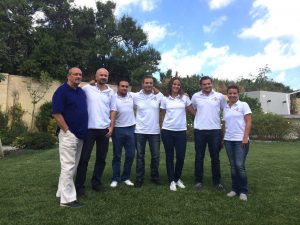 The 8th edition of the Kilimanjaro Challenge will seek to raise €65,000 with which a much needed Kindergarten school will be built in Gambella, Ethiopia, a project which will be named in honour of the late Nirvana Azzopardi. The team leaves Malta on the 27th December 2014 arriving in Kilimanjaro on the 29th. After orientation and acclimatization, the team will start the 8-day climb and subsequent descent of the mountain.

Nearly half of this sum has already been collected by all the team members who have approximately six months to collect the remaining €35,000. Various group and individual fund raising activities such as charity dinners, bake sales and boat parties are taking place during the year and team members have set up donation pages where family and friends can make their donations.

At 5,895 metres above sea level, Mount Kilimanjaro is the highest free standing mountain in the world. Extreme heat at the foot of the mountain and extreme cold at the summit, high elevation and occasional high winds make this a difficult and dangerous trek. The team is in fact doing 2 or more weekly 5-hour treks as well as a number of weekend treks in Gozo that best simulate the effect of trekking on subsequent days. A trekking weekend abroad possibly on Mount Etna is also being considered in the coming months.

The Kilimanjaro Challenge started off eight years ago when Father George Grima, who for the last 25 years has managed hundreds of projects involving the poorest of children in Brazil, Kenya and Ethiopia, approached Keith Marshall for assistance in funding a project, and the Kilimanjaro Challenge was born. Since then, the challenge has seen almost 100 expedition members raising over €450,000 for various projects including the construction of a school and convent in the Ethiopian village of Bulbula, a wing for a 3-in-1 project, a house hosting 100 physically disabled, deaf and blind children in Kenya and a clinic in Sakko also in Ethiopia.

The next fund-raising event by the KC8 team will be a Boat Party for Charity on Sunday 6th July. The boat leaves from Bugibba jetty at 11am and the party finishes at 6 pm and all the proceeds from this event will go towards fund raising for the Kindergarten. The following event will be a buffet dinner with free flowing wine, live entertainment and prize raffles on Saturday 19th July at Xara Lodge.  All events’ details can be found on the official website www.kilimanjarochallengemalta.com or on Facebook/KilimanjaroChallengeMalta.

Be spoilt at the Phoenicia this Summer