On October 8th the St Paul’s group, in collaboration with Teatru Manoel, will present 1914 a concert of Words & Music from WW1 – Under the Spire – at St Paul’s Anglican pro-Cathedral, Valletta, at 8pm.

This is the only such event taking place which commemorates the beginning of the First World War. 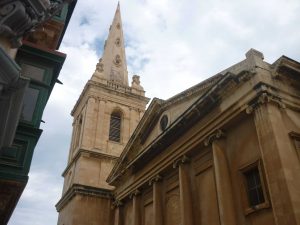 The First World War engulfed Europe for four long years: the aim of this concert is to take the audience on a journey, beginning at the outbreak of hostilities between Great Britain and Germany in 1914, with its attendant ideal of duty and loyalty to God, King and Country. That sentiment waned in the face of mounting casualties, and the horror of trench warfare in France and Belgium. As it was realised the conflict would continue with no end in sight, the earlier enthusiasm was replaced by disillusionment, bitterness and cynicism, and a breakdown in trust in the policy makers at home. Yet the strength of spirit of the beleaguered men was never in doubt.

The anguish was tempered by the unforgettable music of the period. Works by Elgar, Halphen and Boulanger will be played on piano and violin by Alex Vella Gregory and Sarah Spiteri. Poetry and readings from British authors will be read, and Folk Music and Popular songs will be presented by soprano Jaqui Porter, with Shirley and Andre Helleur playing piano and trumpet.

St Paul’s was consecrated in 1844. It had been the wish of the Dowager Queen Adelaide, widow of William IV, to found a place of worship for the many Anglicans in Malta at that time. The Cathedral was designed in the Classical style by the architect William Scamp, and its iconic spire has become a landmark on the Marsamxetto waterfront of Valletta. It was noted at the time “Almost the whole of the English population was present at the consecration. The Bishop perambulated the ground preceded by a verger in purple and followed by ten clergymen in their surplices and scarfs. So many clergymen were certainly never assembled here before. It has happened three times that we have been left for months together with one only to supply all the wants of the 5,000 English which there are generally here including the troops”.

It is the aim of the St Paul’s group to present occasional signature events showcasing British culture and opening the Cathedral to the wider public. Proceeds will be for the maintenance of St Paul’s Cathedral: The Anglican Chaplaincy in Malta & Gozo is entirely self-supporting and receives no funding from outside sources.