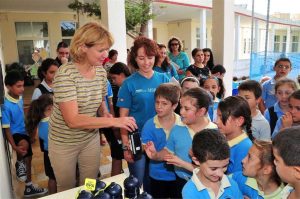 Students of Gozo College San Lawrenz Primary School will be reducing the weight of their schoolbags by some 6,500 water bottles per year. The school has received a reverse osmosis filtration system as part of the HSBC Water Programme’s Catch the Drop campaign.

HSBC Water Programme – Catch the Drop campaign also distributed re-usable water bottles to a number of students who can now stop carrying a disposable water bottle, generally weighing 500gm to 700gm. The distributed bottles are of the highest quality and are BPA (bisphenol A.) free, making them safe for children to re-use. They were distributed by HSBC Foundation for Education France Secretary General Séverine Coutel during her recent visit to Malta and Gozo.

Séverine Coutel said: “The initiative helps students to carry lighter schoolbags as well as save them unnecessary expense of purchasing disposable water bottles. This will naturally lead to diminishing financial costs as well as the environmental cost. Disposable water bottles also use a lot of processed water so having a permanent water bottle reduces the overall rate of water consumption in the long run.”

During a ceremony held on the occasion, students presented special water-related songs and poems. Afterwards, the student council members showcased their exhibition of water-related artwork. Those present for the occasion included representatives from HSBC, the Ministry for Gozo, Eco-Gozo, Ekoskola, and San Lawrenz Local Council.

Installed in the school kitchen, the reverse osmosis system will filter the incoming water from chlorine, silt, rust, and contaminants such as nitrates, pesticides and other pollutants. The resulting potable water will be stored in an under-sink tank for distribution to students by means of a special tap.

The extra waste water rejected by the system will be captured and utilised for the school’s restrooms.

The school officials calculated a total of approximately 6,500 bottles a year based on their students bringing disposable water bottles daily during a scholastic year.

HSBC Water Programme – Catch the Drop campaign is beginning to leave its mark on the ecological footprint of Malta as well as on the young students whose imagination the initiative aims to capture.

Rock down to eclectic Avenue