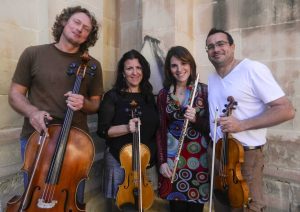 As part of the University of Malta Research Trust (RIDT) on-going campaign to raise funds for research activities, the next tea time concert from the series The Oratory – Music and Art, will be held on Sunday 30 November.

Taking place in the unique baroque ambience of the Oratory of the Jesuits Church in Valletta, every other Sunday at 1630hrs, the second recital features Lumia Flute Quartet. This form is closely related to the string quartet, but with a flute in place of the first violin, which reached its pinnacle as an ensemble formation around the middle of the second half of the 18th century.

The programme features two major compositions written for this formation, Mozart’s Flute Quartet in D major and Flute Quartet No1 in C Major Op.145 by Ferdinand Ries. Complementing these two flute quartets is Hansen’s Trio for Flute, Violin, and Cello.

The quartet is made up of Fiorella Camilleri on flute, Reggie Clews on violin, Sarah Spiteri on viola and Yaroslav Miklukho on cello. All musicians are established orchestral and chamber music performers having performed extensively both locally and abroad.

Proceeds from The Oratory Concert Series are aimed at raising funds for research activities within the University, via RIDT. No booking is required. There is a suggested donation of €10.