Uncategorized
May 5, 2014
by Monique Chambers
0

The Bailliage National de Malte, the local branch of the Association Mondiale de la Gastronomique, La Chaîne des Rôtisseurs, welcomed confreres and conseurs from Bavaria, Hamburg, Stuttgart and Hessen as well as their guests from various parts of Germany, Vienna, Switzerland and Italy to another night of haute cuisine which teased the curiosity of most patrons to identify ingredients and techniques which gave such an awesome outcome. 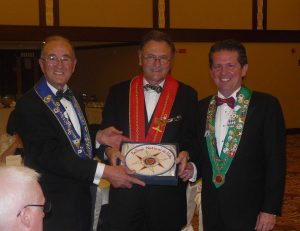 Chancelier Chevalier Charles Gatt gave a special welcome to Chevalier Klaus-Wilhelm Gerard and his partner Federica who were responsible for bringing the group over to Malta to enjoy such a night of highly creative food and the best of Maltese wines.

The Irish Ambassador HE Jim Hennessy and his wife Monica were also welcomed, as was a new professional member Maître Hôtelier David Woodward. David is the General Manager of the Corinthia Palace Hotel and he was previously a Chaîne member in Strasbourg. Another new member has been added to the Bailliage, Dame Dr Marlyse Cremers.

Now to the culinary side which was deliberately biased to introduce the German guests to local fare. To start with, there was a Chef’s choice of amuse bouche, followed by an extraordinary and hard-to-put-a-finger-on revisted seafood flavours with sensations of octopus, red mullet, sea urchins and squid, textured in tomatoes and a calamansi emulsion. This was paired with a Neptunus 2010 DOC Superior Vermentino from San Niklaw Estate in Malta.

The culinary feast was rounded up with caramelised white chocolate and cassis mousse, apple and rhubarb crumble and kumquat ice-cream with a Maltese Guze’ Passito, Syrah Vendage Tardive from Marsovin.

By the time the meal was over, everyone was blasted with tastes and textures which you do not usually come by. So Chef Vella and his brigade who prepared and served the food and wine throughout were toasted and applauded to the full when they showed up at the end with an appraisal by the Bailli Délégué.

Share a bit of Andean culture from Peru and Bolivia

Next Article
0
Monique Chambers May 5, 2014
No Comments Yet