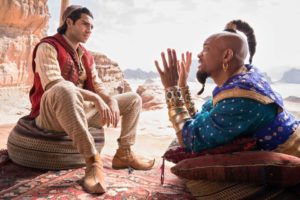 Walt Disney Studios have made a big bet for the coming years : transforming animation films into live-action movies and Aladdin is just the beginning of long series. The king of thieves is driving us into his « whole new world », promising us a surprising cast and hits to sing at the top of our voices.

We all know Aladdin, whether it’s through the tales of The Thousand and One Nights, through the stories we were told as children, or for the youngest among us through Disney’s Aladdin that has rocked many of us or the fact that we all wish we had a magic lamp to grant us wishes.

Disney has taken the bet of doing a remake of its 1992 classic where a simple thief, a street rat, tries his best to survive in the dangerous streets of Agrabah. On the other side of the city Princess Jasmine, the Sultan’s daughter, longs to get out of her golden prison to discover what the world has to offer. But when Aladdin delivers a certain genius from his lamp, everyone’s life will be disrupted!

It was actually a risky gamble to try and transform a classic like Aladdin into a live action movie. Generations of children have grown up with this cartoon -including me- and Walt Disney Studios had a duty not to disappoint them -me-. Putting faces on characters who have never really had any is not that easy. I’m going to grant you all a wish and review the Do’s and Don’t of Disney’s new opus.

Let’s start with the Don’t that we can quickly pass to the Do’s ! Unfortunately, there was some unnecessary modifications that were made from the original story. Disney are mainly known for their heroes but also for their wicked, ruthless and heartless, the wicked ones who scared us as children. Jafar is one of them but unfortunately in this remake, we find him not very credible or even a little in the over-playing. This is one of the only downsides to be found in this remake, but unfortunately it’s a big one. If we’re not afraid of the antagonist, then a movie can become pointless. 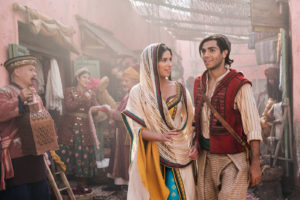 Mena Massoud and Naomi Scott are truer than life Aladdin and Jasmine, they couldn’t have been better cast. The duet perfectly embodies the original characters that we all knew while watching the animation movie as children. A particular attention to Mena Massoud who was actually born to play Aladdin, his ease in both dance and acting promises him a career under good omen. But there’s one that will never stop impressing us and that’s his elder, Will Smith.

We already knew what he was capable of, he proved us over the years. But that performance he made in Aladdin is out of the ordinary. Playing our famous Genius, he manage to be at the same time hilarious, sensitive and gifted. He still amazes us with his artistic talents: no kidding, it’s unfair that he can rap as well as he can dance. Will Smith hasn’t lost any of his superb despite the passing years and it’s as if, by magic, we’ve gone back to the days of « Gettin’ Jiggy with It“. We find with Will Smith, the humour we know from him but also from Disney, reworked with a modern sauce but which still easily takes us away.

Another big positive point for the costumes and sets that shine with a thousand lights. If you want to be blown away, you’re in the right place : colours, sequins, landscapes and Middle East inspirations… We could almost compare this remake to a Bollywood classic so much the live-action movie is eager for colors and exciting sounds, costumes are by the way inspired by Indian outfits.

How can we forget about the songs ? Aladdin is a movie but it is also a musical with lyrics that we all know like the back of our hands. And you’ll be surprised discovering some originals songs added to the old ones that bring a little spice into this colorful remake…

“You aren’t just some prize to be won. You should be free to make your own choice.”

What marks our minds, as grownups seeing Aladdin is that it’s a deeply committed, feminist cartoon that advocates the end of forced marriages, requires positions of power for women and the freedom for them to make their own decisions without the approval of a man, whether its their father or husband. In the end, Aladdin is and has always been the bearer of essential messages to be transmitted to the greatest number of people and from the earliest age.

So be prepared to take a big jump into your childhood watching Aladdin, let’s go back in time to sing at the top of our voices on the songs we all know by heart.

Give them some sunshine ....