Alden’s haunting folk track from her 2018 album Wild Honey has got the electronic treatment, turning it into a sure summer banger

Folk singer and X Factor Malta judge Alexandra Alden has joined forces with Maltese-American music producer Jim Hickey to remix her most recent single, ‘Pilgrim’. The collaboration began while Alden and Hickey were in lockdown in the Netherlands and Germany, respectively, and is a first for the singer-songwriter as it gives her music a more party-friendly vibe.

To Alden’s ‘Pilgrim’, which is a song that explores the journey a person takes towards finding enlightenment, be it spiritual or physical, Hickey has added more up-beat rhythms that work incredibly well with Alden’s voice. The looser, more organic feel gives the song pulsing, swirling synths that move around Alden’s yearning vocal performance, while retaining all the power of the original, particularly that of its lyrics.

“I’ve wanted to hear my music in a different way for a long time,” Alden explains. “That is why I’d been looking for someone to do remixes with. The moment I heard Jim’s latest song, ‘Love in Rewind’, I knew we had to collaborate.” 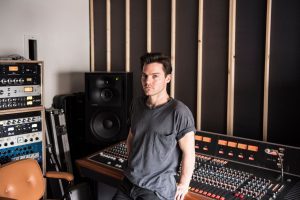 Hickey, who is based in Berlin and has worked on music by Australia’s Joshua Teicher, as well as German bands FINN and AKA AKA, was only too happy to oblige: “Alex’s voice and musicmaking techniques are incredible. Indeed, the remix just literally poured out of me the moment I sat down to work on it.”

The duo also worked on a music video to accompany the new electronic remix of ‘Pilgrim’. Filmed in the Netherlands by emerging visual artist Julia van der Molen, the music video features Alden on a half-sober, half-drowsed journey through Rotterdam, where she has been living for the past few years.

“We used the UNESCO World Heritage site of Van Nelle Fabriek [Van Nelle Factory], which has been described as a ‘poem in steel and glass’ and is a place that is close to my heart,” Alden says. “We wanted to create a contrast between the cold, rigid lines of the factory space and that of the fading light in the dunes, as I simultaneously wake up in these two completely different places. As these worlds intertwine throughout the video, they suggest the possibility of the existence of multiple realities, or perhaps, of dreams and realities merging into one, so that the song and the journey of the pilgrim is the one thing that binds them together.”

‘Pilgrim (Jim Hickey Remix)’ is now out on all international streaming services, including Spotify, Apple Music and Amazon Music, while the official video can be viewed on YouTube.