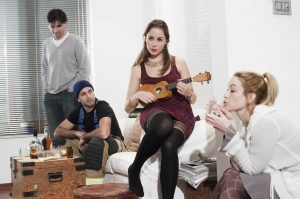 Audiences are in for a treat later this month, when Zack Braff’s popular play, All New People, opens at the Blue Box, within M Space in Msida. The dark comedy will star Malcolm Galea, Jo Caruana, Thomas Camilleri and Maxine Aquilina.

Multi award-winning actor, director and writer Braff, who is best known for his leading role in the hit TV show Scrubs, penned the show in 2011, before starring in the London run at the Second Stage Theatre.

The play itself is set in the dead of winter on Long Beach Island, New Jersey. It tells of Charlie (Galea) who has hit rock bottom. Away from the rest of the world, his perfect escape is interrupted by a motley parade of misfits who show up and change his plans. A hired beauty (Aquilina), a fireman (Camilleri) and an eccentric British real estate agent (Caruana) desperately trying to stay in the country, all suddenly find themselves tangled together in a beach house where the mood is anything but sunny.

All New People is a comedy that has been called ‘Sensationally funny’ by the New York Times, while the UK’s Daily Telegraph celebrated the fact that ‘The jokes keep coming’. And now, following its sell-out UK tour, the show will be premiering in Malta on 27 February.

“It’s very exciting to be bringing this brilliant piece of theatre to Malta,” says director anthony bezzina, who is well-known for past productions such as Noises Off, Cabaret, Doubt, as well as numerous pantos.

“Blue Box is the ideal setting for a cutting-edge and intimate show of this kind, while the experienced cast is effectively stepping into the shoes of the play’s zany characters. I have no doubt that our audiences will enjoy Braff’s slick writing and his undeniable ability to make people laugh out loud.”

Love is in the air

0
Monique Chambers February 3, 2015
No Comments Yet