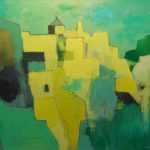 Abstract expressionism is a movement that developed in 1950’s New York and has since, become extremely popular as a genre, comprising diverse styles and techniques. James has developed his expressionist style over the years and emphasizes that his work continues to evolve though his subjects remain the same. It was the success of his first exhibition in 2001, that spurred him on, and to date he has had a number of successful solo shows in Malta as well as abroad namely in Germany, Holland, Melbourne and New York.

Even though James uses the freedom of his art as a means of self-expression, he is constantly seeking a connection with his audience, something he feels is paramount because “art is about the experiences that I want to share”. James embraces people’s personal takes on his paintings, stating that there are no limits to their interpretation;

Most of the time, his works, especially the small intimate landscapes, are imbued with learned symbolism, some of it apparent, and at times, much harder to decipher; the cypress and lately, the palm tree have been a signature trait. “The cypress carries connotations of loneliness and death whilst the palm is representational of hope and endurance, a constant reflection on his life. James tells me that painting his experiences helps him come to terms with them, like some sort of self-therapy that he embraces; “The work provides me with a platform for personal liberation”.

The potency and influence of each of his pieces is powerful, the heavy brush strokes and seemingly random combinations of line and form define the mood. His larger than life abstract work reflects the artist’s spontaneous character, whilst the movement is profound and intense; for each one, James, has his own identity and personal story embedded in each brush stroke. 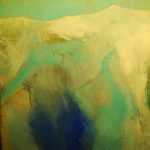 James’ subject matter is timeless, the ever present urban landscapes dominated by the recurrent church dome that appears in most of his paintings only serve as a backdrop to the story telling he does with his colours and form. The hints of pencil marks in some of his smaller works and the bolder charcoal signs in the larger ones at first seem nothing more than insignificant marks, but it is these scribbles that bring out the subtle definition in his pieces.

Over the years James has held on to a number of paintings that he feels depict a significant moment in his artistic career or his personal life. We browse through his private collection of over 40 paintings and it is obvious that their combined symbolism is the embodiment of what has made him the person he is today.