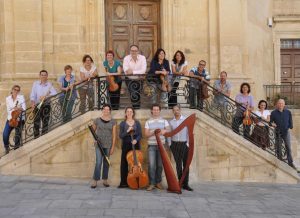 Teatru Manoel is pleased to announce the full programme of the forthcoming third edition of the Valletta International Baroque Festival 2015, for which booking is now open. The success of the Baroque Festival on the international cultural stage is evidenced by the growing interest from Tour Operators who are bringing in more overseas visitors specifically for this event. It is, therefore, advisable to book early for 2015 Festival to avoid disappointment. For the full Festival programme and to book tickets go to: www.vallettabaroquefestival.com.mt or www.teatrumanoel.com.mt.

With 21 events over 15 days in 7 venues the 2015 version builds on the success of the first two. The 2015 Festival is dedicated to the memory of Maltese composer Geronimo Abos as 2015 is the tercentennial anniversary of his birth. “Abos was one of Malta’s greatest and most versatile composers,” explained Kenneth Zammit Tabona, Artistic Director of the Festival, “and we am delighted to announce that his music is not only being performed by local musicians but by foreign ensembles”. His music will be performed by Die Kölner Akademie, Passacaglia Ensemble (which features some of the UK’s leading period instrument players) and the Valletta International Baroque Ensemble.

As a preview to the Festival, the ensemble or VIBE as it is popularly known will be presenting a concert of music by Maltese composer Michel’ange Vella, Henry Purcell, Antonio Vivaldi and George Frederick Handel on Tuesday 8th July at 8pm at All Souls Church, Merchant Street, Valletta. This concert will be the culmination of three days of masterclasses. Entrance to this concert is free.

Ray Attard, CEO of Teatru Manoel (the Festival producers) stated, “With growing success comes increased expectations and, inevitably, more pressure on resources. We are therefore hugely indebted to, first of all, the small behind-the-scenes team that makes this event possible and to our supporters; the Government of Malta as the major stakeholder as well as the growing list of sponsors including the Malta Tourism Authority, Tipico, Phoenicia and Excelsior Hotels and the St. John’s Co-Cathedral Foundation. Without their help this event would not be the international success this Festival is turning out to be.”

The Orchestra of the Age of Enlightenment returns to perform the glorious Bach Passion according to St John in St. John’s Co-Cathedral which will be offset by Michelangelo Falvetti’s magnificent “Il Diluvio Universale”, performed by the Cappella Mediterranea under the baton of Leonardo Garcia Alarcon at St. Publius Church in Floriana, a new addition to the list of venues for 2015.

The Malta Philharmonic Orchestra, conducted by Peter Stark, will present an innovative programme of 20th century works inspired by the baroque which includes a flute concerto by Lukas Foss performed by the Orchestra’s own flautist Rebecca Hall.

The Festival programme also includes music ranging from baroque piano transcriptions of music by Bach, Handel and Gluck performed by Dmytro Sukhovienko to sacred and profane baroque music from the Americas performed by Ensemble Villancico and Handel concert arias presented by Robert King conducting The King’s Consort and countertenor Iestyn Davies. Bach features strongly in this Festival; his Cello suites are performed by the world-renowned Sigiswald Kuijken who will play on that rare instrument a violoncello da spalla and his Goldberg Variations by local pianist Joanne Camilleri. The European Union Baroque Ensemble will perform music by Handel and his London friends and the Festival’s resident ensemble, the Valletta International Baroque Ensemble (VIBE) will perform at two concerts.

The Festival also includes events specifically for children and culminates with the Baroque Festival Ball which will be held in spectacular Sacra Infermeria Hall at the Mediterranean Conference Centre.

Be spoilt at the Phoenicia this Summer

Science in the City!