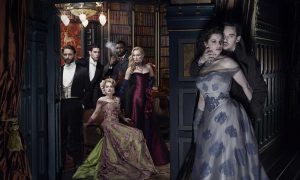 Dracula, the story of the Transylvanian vampire count, is well known to many. In this new adaptation, to be broadcast on every Sunday from 6 July at 9.45pm on GO Stars, the story is given a more modern twist in a late 19th Century London setting.

Michele Dandria, Manager – Content and Digital Media at GO, said, “When we think of Dracula we think of crumbling castles, bats and coffins. But the new Dracula, starring Golden Globe® winner Jonathan Rhys Meyers is a completely different interpretation. This new version, which has been widely acclaimed for its cinematography sees Dracula in London posing as an American industrialist and living in the most sumptuous mansion. GO Stars subscribers can look forward to 10 episodes of this twisted and sophisticated take on Bram Stoker’s classic novel.”

In addition to Jonathan Ryhs Meyers who rose to stardom in The Tudors, Dracula also stars Jessica De Gouw, Thomas Kretschmann, Victoria Smurfit, Oliver Jackson-Cohen, Nonso Anozie, Katie McGrath and Ben Miles. Produced by the same production company which created Downton Abbey and using some 150 different sets, the series depicts a character who is especially interested in the new technology of electricity, useful for someone who avoids the sun. But Dracula has another reason for being in London, revenge on those who cursed him with immortality centuries earlier.

“GO Stars is the home of great TV and the best movies throughout the year. This July, we will continue to bring new, high quality productions such as Dracula, for our subscribers to enjoy,” continued Dandria.

More information on GO Stars which is available from as little as €6.99 per month can be obtained from all GO retail outlets and exclusive resellers, by calling Freephone 80072121 or visiting www.go.com.mt. Terms and conditions apply.