Entrance (access to a sunbed and regular umbrella): €12.50 on weekdays; €17.50 at the weekend
Average spend (for umbrella, sunbed, two drinks and one course): €50
Free access: No
Table (sunbed) service: Yes
Access to the sea: Yes
Pool: Yes
Parking: Road
Best for: Parties by the sea in the heart of Sliema
Stay away if: You you’re looking for a peaceful afternoon 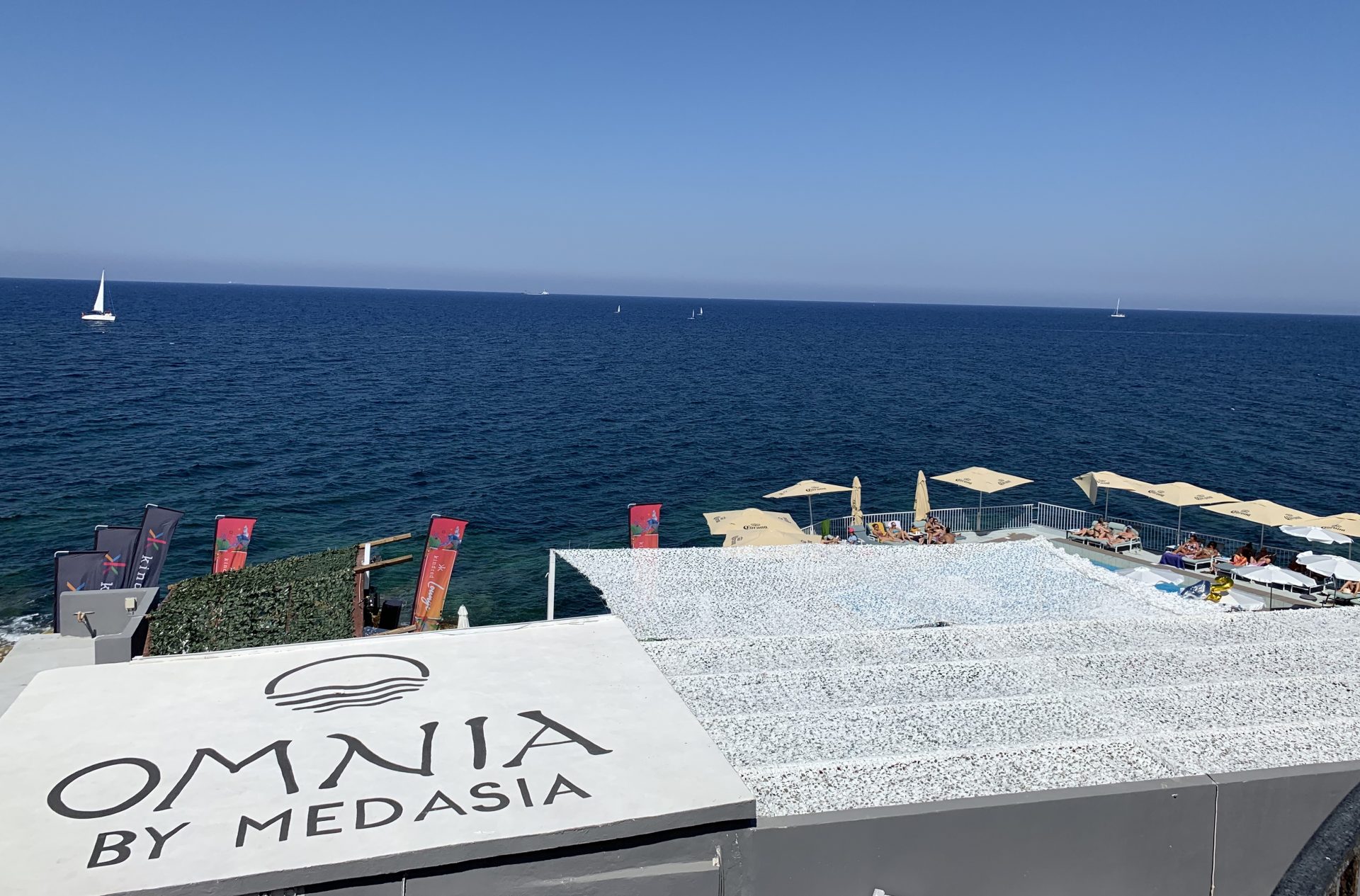 MedAsia has built a reputation for itself, serving good value for money cocktails and bar bites along with some more substantial meals, though the focus of the place has always been on drinking and socialising, with its flagship venue on the Strand in Sliema. In the summer months, MedAsia also opens its doors on the Qui-si-sana seafront at MedAsia Playa and this year it has expanded further to include a new venue just next door, Omnia.
From a Latin expression, meaning “prepared for everything”, Omnia is MedAsia Playa’s wilder sister.
While MedAsia Playa is more about cool drinks and meals by the sea, with live music. Omnia is focuses more on the vibrant party scene.

Until last year, the space occupied by Omnia was taken up by Charles Grech from which they operated Pearl Beach. Whilst the idea behind Pearl was chilled days out by the sea followed by music of increasing volumes that turned into wilder parties, Omnia now focusses more on the party atmosphere to which the property lends itself so well.
Entrance to the beach club is pretty steep, all things considered. At €12.50 during the week and €17.50 at the weekend, these prices do fall after 3pm depending on how busy the venue is. However, if you are only there to use the restaurant or the bar, entrance is free. Given its party nature, children are not allowed at the beach club at all, giving the adults free-rein to do as much drinking as they see fit without having to worry about kids splashing around in the pool cramping their style. 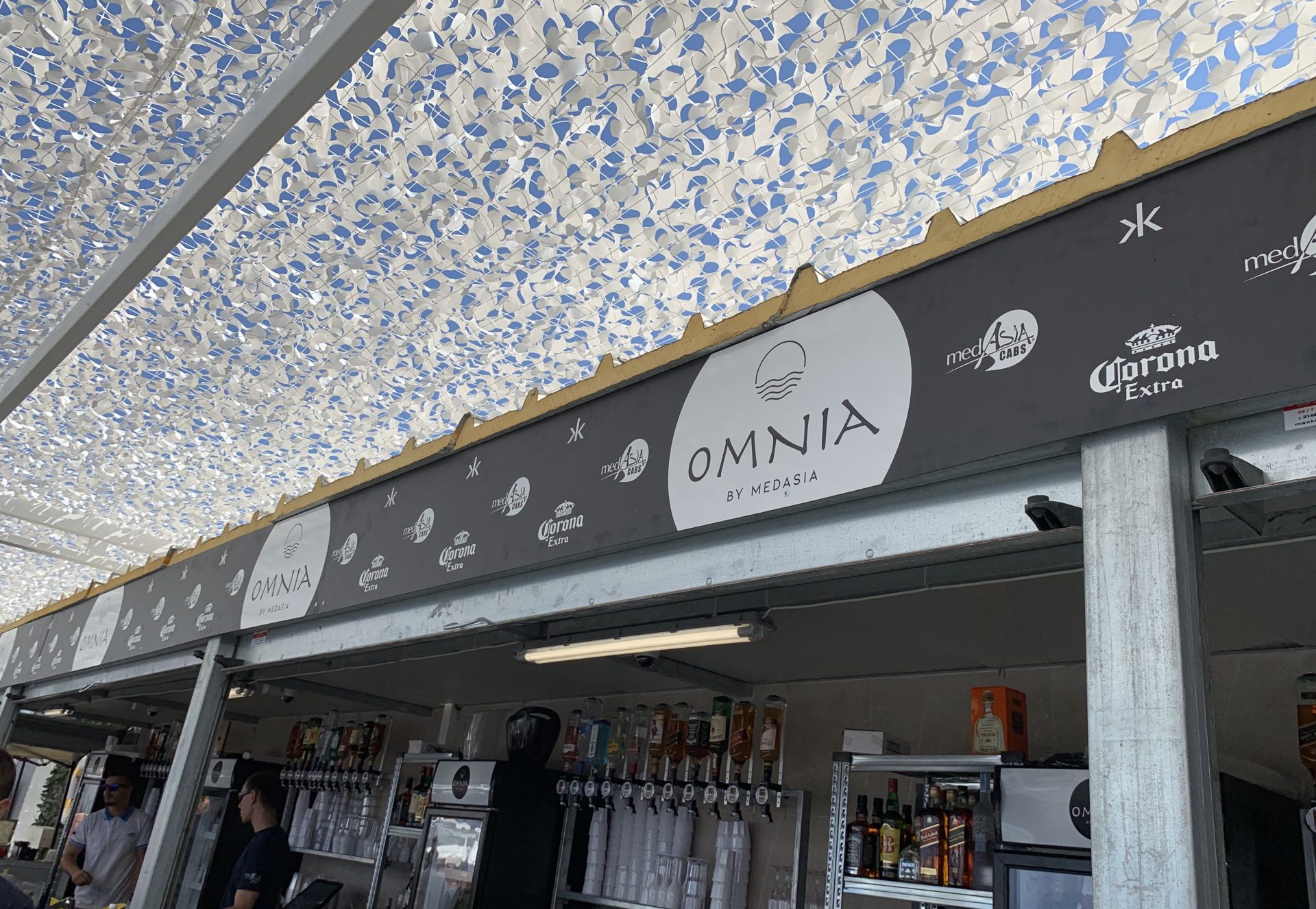 There is a sign outside the club that says topless bathing is allowed at the beach club – not something you see often at local beaches – however, on this occasion no one was taking advantage of this.
Few beach clubs offer access to the sea as well as pool areas. Omnia is one of the few. When the sea is calm the water is clear and beautiful, however it is often too rough, even in the summer to allow access to the sea and then swimming can only occur in the salt water pool, however if you’re perched on the edge of the pool with cocktails being delivered to your sunbed in a steady stream that is the complete opposite of a problem.
As with all beach clubs in Sliema, getting there and parking are no easy feat, although if you are partying, perhaps this is a good deterrent from drinking and driving.

Beach days aren’t always about relaxing in the sun. Sometimes you’re looking for a something a little more upbeat and with a line-up of DJs that include the best available on the local market as well as some interesting foreign names – Fatman Scoop will be playing there on 20 July – Omnia promises to be a summer venue offering just that.

Written by Rachel Zammit Cutajar who was too busy doing handstands and having ‘F’ it Fridays to load herself.