After so many films based on male characters and with the takeoff of Wonder Woman last year, MARVEL studios decided to do an origin story about a super-heroine : Carol Danvers alias Captain Marvel.

Captain Marvel is a hymn to women, a love letter to female empowerment. The film, carried by the sublime Brie Larson, presents the audience with a super-powerful heroine caught in an intergalactic battle. The casting is full of surprises and women are in the spotlight in roles as scientists (Annette Bening) or airline pilots (Lashana Lynch), another victory for those who were previously relegated to the rank of extras. Carol Danvers aka “Vers” and all the female characters in the film carry a message of combativeness and above all of liberation from an overly oppressive patriarchy. Off-camera, the film is also deeply feminist, 50% directed and written by a woman: Anna Boden.

As always, MARVEL Studios surprises us with this action movie, which is rich in twists and turns that takes place in the 1990s. We follow the adventures of Nick Fury (Samuel L. Jackson) during SHIELD’s creation, a story that tells us more and more about MARVEL Universe’ movies. The 90s vibe is captured perfectly and is very effective, and the film’s music played its role to perfection. Ben Mendelsohn’s arrival in the cast brings Captain Marvel a breath of fresh air, the actor who portrays the role of Talos, wears the  costume of a « joker », MARVEL’s way, surprisingly well. 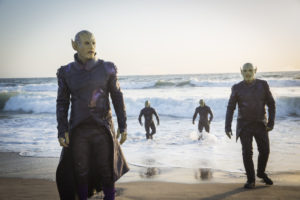 Once again, MCU takes the viewer through a war that has left a people behind, landless, a situation that is very similar to the ones that some people are currently experiencing on Earth. This isn’t the first time that MARVEL production has taken the side of talking about migrant people in its films: Captain Marvel who exudes honesty.

Despite this, the film runs out of steam a little in its middle, leaving us doubtful about the end of this epic. But in the end, what we remember most is the sincerity and tolerance that emanates from this project. We should rejoice about the willingness of MARVEL producers to finally change the dictate imposed on superheroes and to make more films that deviate from this hached model, as we recently saw with Black Panther and Wonder Woman. 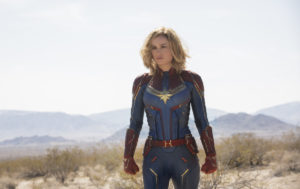 Captain Marvel will take you to the depths of the galaxies, to the ends of the worlds, for a fiercely feminine story so don’t hesitate any longer! Released in theaters on March 8th. Irony or perfect timing ? We think it’s a Marvel’lous idea.

Clothing And Accessories For Every Occasion