For some odd reason, the Couture shows never excited me as much as the pret-a-porter ones,  which is silly really as Couture is what predicts what will happen in the forthcoming seasons. I think I was never a fan of what seem to be unwearable gowns boasting of excess.

This year things have changed. I am totally infatuated by what I saw in the collections. I must admit some were a disappointment – Gaultier, case in point, but others were incredible, inspirational and most importantly wearable. Let me take you through my favourite collections.

The gold medal goes to Raf Simmons at Christian Dior – after last year’s debut, where he converted rooms and lined them, ceiling to floor with panels of blooms making a gorgeous architectural abstraction of nature and having shown a collection that fashion hadn’t seen for a while, it was not going to be easy to surpass that this year! The designer himself said that he wanted to bring a reality to the clothes (precisely why they have become so wearable) and indeed he did by adding trousers and pockets- pockets in ball gowns, how modern is that! Keeping to his passion for flowers, this collection had practically invisible delicate beading, a trompe l’oeil drift of pansies across a waistband, a cocoon of embroidered and appliquéd blooms and sheer gloves covered in florals. The shoes were a serious must-have! The cutest styling to this whole look was how all the models sported short pixie crop wigs, albeit one model whose hair actually was that short, resembling a young Audrey Hepburn, together with the red crystal-infused lips. Sheer perfection.

A close runner up is definitely Valentino. Ever since the ever so talented Maria Grazia Chiuri and Pierpaolo Piccioli took over, they injected a youthful and ravishing style to this label. Beauty like this comes at an exalted price, but ladies, it is well worth it! Organza dresses embroidered with butterflies and birds wrapped in tulle, dresses made out of  lace with multi-coloured flowers and dresses in hand-painted organza. A magical and totally perfect collection!

Chanel- Karl Lagerfeld fascinates me and I envy him. This was a melancholic  collection which ended in a tongue-in- cheek way, directed to politicians in France (and even Malta) about gay marriage, having two female brides instead of one. Lagerfeld treated us to a couture collection whose substance was glitter and shine. The daytime tweeds sparkled, the evening looks had sequins. The silhouette was determined by a feature Lagerfeld called “frame shoulders.” Sometimes they almost looked like armour and at others, they were fichu-like. The footwear was key to making the whole look contemporary. The only thing which I did not relate much to was the hair, which seemed like birds’ nests, but it seems like this was the gist of the show as a whole forest was shipped tree by tree into the Grand Palais. What happened to these trees after the show, I would like to know…….? 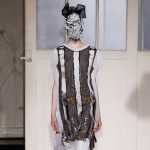 A firm favourite of mine both in his pret-a-porter collections and his couture,  Margiela did not let me down on his second season at the Couture shows. Models in cloth masks showcased Maison Martin Margiela’s Haute Couture spring/summer 2013 line, including vibrant feathers, foil-like ruffles and Seventies wedge booties.  Particularly interesting, though, was the way the Maison re proposed beaded twenties evening dresses into something more like outerwear which involved a process of restoring beadwork, then bonding it to a trench, a “cigarette line” coat, or a  windbreaker jacket. Masks are ‘de rigeur’  – a must-have in the seasons to come for the avant-garde.

One can totally understand why Hollywood loves Ellie Saab. To me, at times it resembled traces of collections from Tom Ford and Valentino BUT it was undeniably beautiful albeit 100% original. His signature beading was this time rendered in tone-on-tone or silvery embroideries on lace and tulle of varying transparencies. An Ode to Delicateness, he called the collection, and, indeed, with illusion necklines and sheer sleeves, his creations at times seemed to float on the body. Safe but definitely a loved collection by most.

Atelier Versace was a bit too much for my liking. I mean, really, who would wear the gold lame suit? Actually, thinking about it, probably several women would, but not me! This collection, as always spelt SEX but definitely not class. The short-in-front/long-in-back dresses are one of my pet-hates especially when they come in shiny neon chiffon. Thank God for the super model quotient in this show to distract me – it’s always lovely to see the beautiful Stella Tennant and super cool Kirsten McMenamy.

Armani Prive  was totally predictable and although will be appealing to many a client, it did not excite me in the least. Let’s face it, Mr. Armani needs to rope in some young blood into his house!

Of course the couture shows embraced more designers which did not send enough shivers down my spine to make me want to include anything be it good or not so good in this piece. In the meantime, all eyes on who is going to wear any of these wonderful gowns at the Oscars.

@styleaholc says: Get On Your Glad Rags

0
Monique Chambers February 2, 2013
No Comments Yet