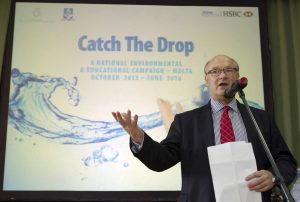 HSBC Group Chairman Douglas Flint today officially launched a Malta-wide environmental and educational campaign, ‘Catch the Drop’ at Paola Primary ‘B’ School in the presence of the Minister for Education and Employment Evarist Bartolo, the Minister for Energy and the Conservation of Water Dr Konrad Mizzi and HSBC Bank Malta Chief Executive Officer Mark Watkinson.
Catch the Drop is a large-scale three-year initiative partly-funded by the HSBC Group to raise awareness about water conservation and stimulate positive change towards sustainable fresh water use in Malta and Gozo. The campaign aims to reach every single student in Malta, that is, over 50,000 students coming from 155 schools, all the 67 Local Councils in Malta and Gozo, as well as the Maltese public at large.
HSBC Group Chairman Douglas Flint said: “One cannot overstate the importance of having access to sustainable fresh water. Water is essential not only to human health and happiness, but to the prosperity and the economic development of communities and nations. That applies as equally in the western world as in developing nations. Although surrounded by sea, Malta is ranked amongst the 10 countries with least fresh water resources on the planet.”
Mr Flint added: “The Catch the Drop campaign will play a significant role in raising awareness of water scarcity in the Maltese islands and the HSBC Water Programme aims to increase its impact even further.”
Minister Evarist Bartolo said: “By emphasising awareness among students, this campaign acknowledges that our youth are our future, and that instilling an appreciation for natural resources is key to achieving environmentally sustainable practices.”
Minister Konrad Mizzi said: “This impressive venture, supported by no less than €500,000 of HSBC funding, offers a nationwide educational approach to water conservation that encapsulates the spirit of corporate sustainability.”
The campaign’s strategic approach can be broken down into three phases: year one will focus on raising awareness on a national level about Malta’s water challenges, year two will work towards a reduction in water consumption in Malta, while year three will emphasise water harvesting techniques in schools and local councils.
“Integral to this campaign is the involvement and participation of HSBC employees, 300 of whom have already volunteered their services. This generous group effort will ensure that one or more of HSBC Malta’s staff will be available in every school in Malta and Gozo to provide focal points for the Catch the Drop campaign,” said HSBC Malta’s CEO Mark Watkinson.
In the run up for the Catch the Drop Campaign launch, around 180 HSBC Malta employees volunteered to promote this cause by delivering water presentations within the ‘Skolasajf 2013’ programme, thereby reaching out to over 4,000 summer school students across Malta and Gozo.
HSBC Water Programme is a USD100 million global initiative.