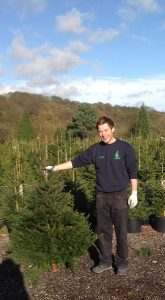 It may not win you an Olympic medal, nor promise you a lean athlete’s body anytime soon, but Britain’s newest sport could certainly put you in the festive spirit.

A village in Staffordshire is to become the first in the country to host an official Christmas Tree Throwing Competition later this month.

Already a popular ‘sport’ in southern Germany, the contest will see its UK debut at Keele Christmas Tree Farm in Newcastle Under Lyme.

The brains behind the festive challenge is teenage entrepreneur Charlie Reynolds, who took over ownership of the farm’s tree business three years ago.

At 19, he has gained the respect of his tree-growing peers, and recently took part in the British Christmas Tree Growers Association’s national competition which selects a grower to deliver Downing Street’s tree for the season.

Unlike Germany’s model for the throwing competition, Charlie’s contest will take place before Christmas, with a weighed and measured Norway Spruce being provided by the organisers.

Competitors will be judged for how tall a throw they can achieve, and how far.

Previous Article
Next Article
0
Monique Chambers November 24, 2014
No Comments Yet