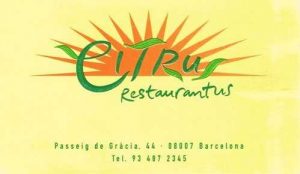 To make up for the dans le noir experience, I felt it only proper to share my favourite restaurant with John. Citrus, which is just off avenida de las Americas, is perched overlooking the street and a number of trendy tapas bars. Having been in my 20s and 30s, I thought it prudent to check it was still open and still had a good reputation.

We booked for lunch and so had it seems, half of Barcelona. These were regulars with 3 tables of pesky tourists scattered in between.

The waiters are now armed with tablets and headsets but the rest of the restaurant seemed to be the same. The menu is now not only in Catalan, but caters for the Japanese and European with translations of the range of dishes.

We chose some appetisers; foie bonbons, deep fried artichokes and croquettes of ham with cheese. The bonbons were a pat of pate with a pancake blanket crisped with caramelised sugar, yum. Luckily there were about 10 morsels for us to devour. The deep fried artichokes should have been served at blind tasting the night before; they could have easily been a white fish, the texture the same a thigh flesh and almost flavour-less bar the salted flour coating. The croquettes weren’t my cup of tea, but John enjoyed them, hot and creamy he declared.

We shared a starter because our waiter told us we would be too full otherwise. There were so many to choose from, but the mushroom mille follie won. It was big enough to share and we did start to believe this the young man was right.

Our mains, for me a herbed veal palliard with spaghetti fries and for John the veal entrecôte with pumpkin and potato gratin in a truffled cream sauce. Mine deliciously fragrant and the chips brought out the child in me, John’s meat so tender he ‘almost didn’t need a knife’ and he allowed me one piece to try.

I had my eye on a dessert so did leave some of my meat, but seeing as the reason I have returned to citrus each decade is to steal a recipe or two, I just had to keep the game going.

A fluffy Greek yoghurt had caught my eye so this arrived at the same time as a coffee for John. Rather voluminous, I began to think my eyes were bigger than my protruding belly. Sinking my spoon in though, it was apparent the mousse was cloud-like, not too sweet and coloured by dehydrated raspberries. Delicious. My syphon has a new recipe to try! I kept mmmmming through the yoghurt and found a ball of raspberry sorbet nestled underneath. This mixed with the yogurt made for a perfect combination of sweet and tart, and the colour one I wished I could have meters of silk in.

I will be returning to citrus before my 50s, indeed, I am hoping to go again this week!