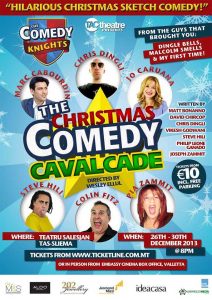 The Comedy Cavalcade at the Salesians Theatre is not a show for the feint hearted. Brilliantly scripted and cast, the show hones in on all the happenings of the year from the second the curtain goes up.

Innovative, innocent, close to the bone and pythonesque humour are fired at you in a mix of (mostly) English, with the occasional reference in Maltese; both getting laughs at different speeds.

I wish I could share a video of a couple of the sketches with you, as a description won’t do them justice; you have to have been there. There’s one where three members if the cast are in Lycra – they in fact didn’t need to move, just them on stage in these costumes had the crowd roaring. Pia Zammit who got to show off her singing skills looked like she had the most fun in this one.

The gorgeous Jo Caruana had a variety of parts, all distinctly different, all executed to perfection.

The Fitzerland sketch had Colin Fitz as a statesman, but his panto performance will have you crying with laughter. The full cast work well together in one where the passports for sale idea emerges – it so must have happened like that – and best of all, the It wasn’t me song – with the hilarious Chris Dingli and dapper Marc Cabourdin which had a few people uncomfortably shuffling about in their seats. And rightly so. Pure genius. Those few minutes were probably my favourite piece of theatre all year.

Some of the religious mentions are a bit on the edge and for once, Steve Hili wasn’t, but hey, it’s comedy. And the rest is purely taking the mickey out of our amazing little country, and the massive cock-ups it has seen this year.

Corinthia Fair donates to Beyond the Moon