Adrian Mamo is an architect in private practice. He also lectures in Theatre Set Design at the Department of Theatre Studies at the University of Malta and currently occupies the post of President of the Malta Society of Arts. Adrian has designed over 50 stage sets for various local theatre companies and agencies, including classic and contemporary plays, musicals, pantomimes and concerts. His latest project is the set design of Kafka’s Insect, composer Ruben Zahra’s interdisciplinary adaptation of novelist Franz Kafka’s seminal short story The Metamorphosis. Adrian spoke to indulge.com.mt about the project, which can now be enjoyed in its entirety online.

You are an architect by profession, yet you are also very prolific in the cultural world. When did you take up theatrical set design and what inspired you to do so?

I became familiar with the theatre scene from a very young age. My Aunt Lina and my Uncle Michael did make-up and hair/wigs respectively for practically all theatre productions for quite a few decades, so I would often spend time backstage with them. My first ventures into set design came in 1991 when I was asked by the MADC to design their three productions that year – The Merchant of Venice at San Anton Gardens, The Cherry Orchard at the Manoel Theatre, and the Christmas pantomime Sinbad, also at the Manoel Theatre. I had graduated in architecture a few years before and was fascinated by the creation of spatial environments. 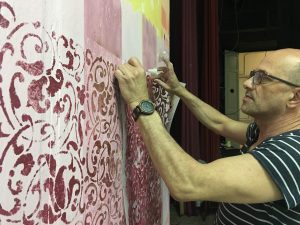 What were your first thoughts when Ruben Zahra approached you with his ideas for Kafka’s Insect?

The prospect of working on such an iconic script was immensely exciting. And although I’ve designed a lot of sets for theatre productions, working for a film project brought new challenges because the set would be viewed and captured from close-up rather than from a distance, and therefore texture and detail are all-important. 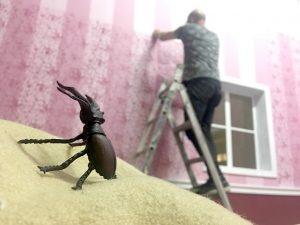 When undertaking designs for a theatrical production such as Kafka’s Insect, what is your starting point and what are the biggest challenges?

The starting point is always the script. Reading the text one gets to know the requirements of the set. In this case, for example, the set had to depict a bedroom in a small apartment. Furniture had to be dragged along the floor, and therefore the floor texture was important. Gregor climbs the walls, and therefore these had to be detailed too and evocative of the period. There is a knock on the door at one point, so we decided to include a door and also a window to be able to introduce lighting effects.

Then there is also research. The setting is Austria-Hungary (today the Czech Republic) roughly at the turn of the century (1900) or before. We can gather this because the script talks about horse carriages. Cars were only in use in the early 20th century. Research went into the type of wall treatments, the furniture, accessories, etc. and we tried to achieve the best detail we could. 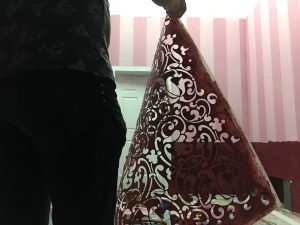 This promises to be no ordinary production, what with its video/live music/performance elements. What do you hope audiences take away with them from the performance?

The aim of Art is to take us to places we may not be familiar with and immerse us in new experiences. Kafka’s Insect is an ideal story to do this; the narrative is strange to us at first, yet it speaks of the horrors of human isolation. It is a poignant tale and in the hands of Ruben Zahra’s multi-media production, it will surely be an unforgettable experience.

My favourite indulgence by far is books. I could probably throw everything else out, except for my library. Besides fiction and non-fiction I’m especially fascinated by source books, mainly on art, theatre, film, history, and biography.

Kafka’s Insect is supported by Arts Council Malta – Malta Arts Fund and was premiered online on Friday 12th February. You can enjoy the full performance of ‘Kafka’s Insect’ on the project’s Facebook page

The Trial of the Chicago 7-Review