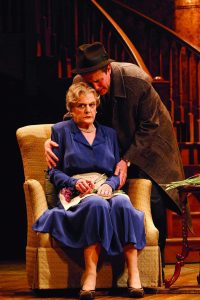 Showing exclusively in Eden Cinemas’ multiple purpose theatre on the 25th of May at 18:30 is the famed Theatre Production ‘Driving Miss Daisy’. Written and produced by America playwright Alfred Uhry, the production stars the inimitable Angela Lansbury, who is renowned for her role in ‘Bed knobs and Broomsticks’ and the TV series ‘Murder, She Wrote’, where she played the part of Jessica Fletcher. She has also won numerous awards for her theatre performances, including a Tony Award for Best Featured Actress in the 2009 Broadway revival of ‘Blithe Spirit’.

Alongside Lansbury is James Earl Jones, who won a Tony for his stage performance in Broadway production of ‘The Great White Hope’. Also starring in ‘Driving Miss Daisy’ is Boyd Gaines, whose performance in ‘Journey’s End’ on Broadway led to a Tony Award nomination.  The screening of the play will be followed by a special Live via Satellite Q&A with Angela Lansbury, which is being broadcast from the British Film Institute (BFI) in London. The Q &A gives audiences insight into the actress’ motivations for doing the play as well as a look back at her incredible career in film and on the stage.

Filmed at The Comedy Theatre in Melbourne Australia, ‘Driving Miss Daisy’ tells the affecting story of the decades-long relationship between Daisy Werthan, a stubborn Southern matriarch, and Hoke Colburn, her compassionate chauffeur. An iconic tale of pride, changing times and the transformative power of friendship, the play has warmed the hearts of millions of theatregoers worldwide.

Tickets for ‘Driving Miss Daisy’ are being sold at €14 for adults and €10 for those under 16. Visit www.edencinemas.com.mt to purchase your tickets online or call on 23710400.

Next Article
0
Monique Chambers April 21, 2014
No Comments Yet