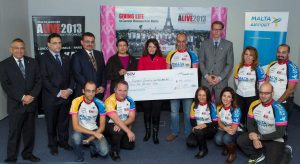 Thirty-eight adventurous cyclists, forming part of the ALIVE Charity Foundation, are donating the initial sum of €55,000 today, to benefit a breast cancer research project, facilitated by the Research, Innovation and Development Trust (RIDT) of the University of Malta. The charity ride project, called Malta Airport ALIVE 2013 Cycling Challenge for Cancer, covered a distance of 820 kilometres from London to Brussels and onwards to Paris last July.

ALIVE Charity Foundation Chairperson Nicky Camilleri together with Esther Sant, chairperson of Action for Breast Cancer Foundation (ABCF), a lobby group working for breast awareness and for better service and treatment of breast cancer patients, presented the donation to Professor Juanito Camilleri, Rector of the University of Malta and Chairperson of RIDT, at the Malta International Airport.

“The Malta Airport ALIVE 2013 Cycling Challenge for Cancer was our first concerted initiative with ABCF and the RIDT. It was specifically dedicated to raising awareness on breast cancer and to raise funds for such a worthy cause.  From the launch, we immediately received positive support from a number of helpers and generous sponsors, in particular Malta International Airport, whom we sincerely thank. They were a source of  tremendous courage to keep us working and training for the charity ride,” said Nicky Camilleri.  “For us, today is very special and mostly rewarding day to be able to contribute to a cause that is of concern to all people in Malta.”

“This was the last wish of our dear co-foundress Helen Muscat to see that ALIVE’s mission and money is being passed on for further research in breast cancer in Malta with the aim that breast cancer patients would potentially benefit from the continous improvement in patient treatment,” said Ms Sant. “Our heartfelt thanks go to all ALIVE cyclists and members who shared their time and resources to raise money to bring this initiative to fruition.”

On receiving the donation, Professor Juanito Camilleri explained that “the money will go towards a specialised programme with the aim to unravel the genetics of the Maltese population in order to ensure improvement in survival rates of cancer patients. With this money, the University of Malta will sustain the crucial scientific research in breast cancer for the coming years. This will lead to mid and long-term benefits for the Maltese society.”

Malta International Airport’s, Chief Executive Officer Markus Klaushofer, said: “It’s a great honour for us, to be part of this noble cause. We are proud to have supported Alive Charity Foundation in their first cause” The CEO thanked all those that gave a donation, including Malta Airport’s employees.

The money will benefit a PhD science student in breast cancer research under the tutorship of Professor Christian Scerri at the University of Malta and in collaboration with Mater Dei Hospital.

ALIVE 2013 has drawn up an audited financial report of the event which is available to the public.

Order presents from the UK now!