What does Francis Rossi of Status Quo think about global warming? Does Ian Gillan of Deep Purple think we’re doing a good job of caring for the planet? 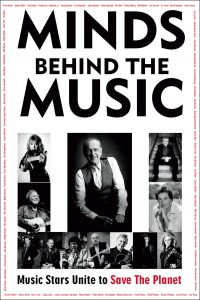 These questions and more are tackled by going to the source and asking them. Suzi Quatro, Don McLean, Kenney Jones, Marcella Detroit, Ian Anderson, Simon Kirke and many more.

Over eighty music stars, past and present, are quizzed on their opinions about religion, aliens, politics and of course, the issues of climate change.

Why? To raise awareness about the plight the planet is in.

Nothing speaks to humans more than music and the influence these legends of rock and pop have is immense.

Funny, thought provoking and eye opening, Minds Behind the Music is a book unlike any other. So settle down with a nice environmentally friendly cup of tea and enjoy whilst listening to the fundraising album of the same name featuring indies and stars like Mungo Jerry and Simon Kirke of Bad Company. An album of unique and special songs recorded especially for Minds Behind the Music.