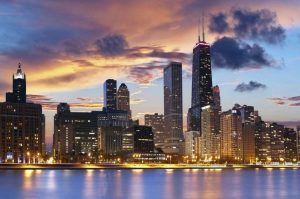 Emirates, a global connector of people, places and economies announced that it is launching a daily service to Chicago’s O’Hare International Airport, Terminal 5 from 5th August 2014. The service will be operated by a Boeing 777-200LR powered by GE90 engines.

Chicago will become the airline’s ninth gateway in the USA, following soon after the commencement of its services to Boston, Massachusetts on 10th March this year.

Chicago, Illinois is the third largest city by population and GDP in the United States, with a population of 2.7 million. Incorporated as a city in 1837, it is famed for its rich cultural heritage, world-class arts establishments, accomplished sports teams and iconic tourist attractions which attract about 46 million people each year.

In addition to carrying passengers, the aircraft will also carry up to 17 tonnes of cargo to further increase the trade opportunities between Dubai and Chicago. Emirates already operates a twice weekly dedicated freighter service to Chicago which in 2013 carried nearly 7,400 tonnes of cargo from the city and over 4,200 into the city.

Tickets are now available for sale on www.emirates.com or your preferred travel agent.