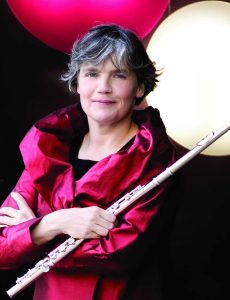 Elisabeth Möst’s concerts are an experience. With her beautiful sound, her ability to affect and her deeply impressing musicality she creates an atmosphere in the concert hall, which never fails to fascinate. Her musical style is characterized by transparency, truthfulness and the artful way in which she interprets the transitions. Having received several awards, she made her debut in London in 2001 with the premiere of a piece which Helmut Neumann had composed specifically for her.

Her comprehensive repertoire, ranging from Baroque to Contemporary, always delights her audience. Inspired by nature and intellectual thought, she creates multi-faceted programmes on themes, which are, musically as well as thematically, amongst the most interesting of our time. Many contemporary composers have dedicated works to Elisabeth Moest, among them Violeta Dinescu, Nikolai Badinski, W.A.Schultz. She is a much sought-after interpreter of contemporary music.

Elizabeth will be accompanied by pianist Giselle Grima who has rapidly established herself as a professional performing artist based in Malta. Described as a pianist of an ‘intelligent and sensitive’ nature, her solo recitals have taken her to several countries. As an accompanist and chamber musician, she regularly collaborates with local and foreign professional vocalists and instrumentalists.

There is a pre-show talk by Neil Briscoe-White at 7.15pm.

Tickets are €15 and €10 with a 50% discount for students and senior citizens.