As I was in Malta last weekend, the youngest of my brothers, Septimus, popped over with his brood. He asked if I would mind looking after my eldest niece Patience for a few hours whilst he and the boys went to see some people in nylon leisure-wear kicking a leather ball around. There was I excitedly planning an afternoon at The Manoel taking in a bit of Oscar Wilde, followed by a light supper at The Phoenicia. Silly me. I always forget what those pesky millennials are like. Instead, she dragged me to the cinema kicking and screaming, literally, to suffer through a new release called Birds of Prey. Oh. The. Horror. Well, to give it its full title; Birds of Prey: And the Fabulous Emancipation of One Harley Quinn. Gosh, what a mouthful. A spin-off from the Batman comic series, apparently. I nervously sat down with my mind racing with ways in which I could hound Septimus into making this up to me. I was not amused.

I needn’t have feared. As soon as I saw the name Margot Robbie, I let out one almighty sigh of relief. That lady can do no wrong in my eyes. ‘The Wolf of Wall Street’, ‘I, Tonya’, ‘Once Upon a Time in Hollywood’…need I continue? No? Good. Margot plays the title role, with a motley crew of women buzzing around with names like Huntress, Black Canary etc. For those of you like me, who do not read comic books and have no idea who all of these characters are, the plot was as simple as thus; Self-titled ‘bad-ass’ Harley Quinn needs to track down a diamond which lies in the possession of a young female tearaway, to save herself from the evil clutches of ‘Black Mask’. Played with all the conviction of a used car salesman from Gzira courtesy of the normally wonderful Ewan McGregor. What went wrong Ewan, you poor dear? Bad directing? No time to prepare? Tell me, I won’t breathe a word I promise. I only want to help, honestly. Because if this was your attempt at auditioning for a Bond villain, I have one word for you my boy…NEXT. 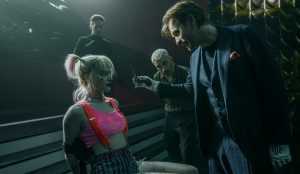 Bad accent and awful hair from Mr McGregor aside, this snazzy little number of a film zips along at quite a pace I can tell you. I’m glad I took my snuff with me. Think punky Spice Girls creating merry hell in a stylised Manhattan beating on all manner of nasty men for a few hours. This film is Girl Power personified. Girls that like to ‘kick-ass’, (what a horrid phrase that is) in a spectacular fashion. Although I am usually one to steer clear of violence on screen; the elongated fight scenes were so well choreographed, and cartoonish in a Tarantino sort of way, that at times I almost felt like I was back at the ballet in Covent Garden. 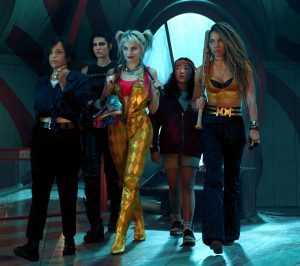 I am all for Girl Power, believe me, and it is wonderful to finally see huge Hollywood blockbusters on our screens with a majority female cast that have also been written, directed and produced by women. However, I felt it a little clumsy at times. Try as I might to suspend my disbelief, I found it slightly jarring that dozens of men who resembled Paceville nightclub bouncers lined up patiently to be either killed or knocked out by one 60 kilo woman. Black Canary is heard singing the James Brown classic ‘It is a Man’s World’ at one point, (in amazing spray-on gold lame trousers I have to say), and Harley Quinn has a fantasy sequence paying lip service to Marilyn Monroe and Madonna. We get it. Girls are tough, ‘enough already’ as my editor Esther always bellows. But it didn’t spoil the overall fun, which is what this is, a brightly coloured candy-floss of a film. Lots of style, not much substance.

Where it shone for me though, were the fleeting moments in which it referenced some of my favourite films. Baseball bats and make up recalled that 70’s New York classic ‘The Warriors’, Huntress gives us a humorous snippet of De Niro in ‘Taxi Driver’ and I even spotted a little bit of ‘Silence of the Lambs’ as Harley Quinn attempts to break out the aforementioned young tearaway from a jail cell. Dame Robbie brings a bit of gravitas to a role that could easily have been awful in the wrong hands. And it was wonderful to my old chum Rosie Perez back on the silver screen as a Gotham City cop with cheesy lines. A little aside, she wears a fabulous t-shirt at one point with a charming slogan embroidered across the chest. If you see one on your travels, do get in touch. I’m not normally a t-shirt man, as you may have noticed, but for this, I am willing to make an exception. I won’t spoil the ending but will remind you that this is Hollywood we are dealing with, not Denmark.

Patience loved it, which is what really matters, and was high-kicking her way around Valletta afterwards scaring the bejesus out of a few Karozzin drivers on the way, whilst simultaneously keeping her eyes firmly peeled for some skin-tight gold lame trousers. Sadly she couldn’t find any to fit me.