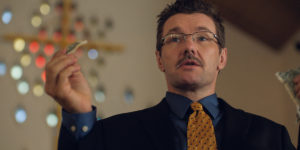 Lucas Hedges plays the main character in this American drama in which Jared, son of a Baptist pastor, sees his homosexuality revealed to his very religious community and faces an ultimatum by his parents : to undergo a conversion therapy program or to be banished by the people he has known all his life. This biography, adapted from Garrard Conley’s novel, Boy Erased : A Memoir of Identity, Faith, and Family,  and directed by Golden Globe- nominee, Joel Edgerton, accurately relates a teenager’s perpetual fight between the life he wants to live and the one that has been chosen for him, his self-love and the one he has for his family…

The movie takes place in a puritanical America, governed by God’s laws where a young pastor’s son tries to discover who he is despite his family’s beliefs. Through flashbacks of his daily life and conversion therapy’s moments, we discover the struggle of a young homosexual divinely led by Academy Award- nominee Lucas Hedges, who gives the film all its splendour, its innocence but also its hardness.

Joel Edgerton’s feature film, whose playing Victor Sykes the leader of the therapy program, is a mixture of powerful scenes where the viewer can react to the harshness of Conversion Therapy programs, moving in contradiction with certain scenes of calm flat, a metaphor of the character’s life, torn between the decent young man he must be and the person he really wants to be.

This game of false pretence pulls us all through the film, helped by the parents characters, played by Nicole Kidman and Russell Crowe, displaying a palette of emotion that gives their performances a certain psychological depth, the one of loving parents who are torn apart between their convictions and the love they have for their son. As you can see, Boy Erased as a very surprising and brilliant casting, also involving Xavier Dolan – Césars Winner, playing an ambivalent character who went from enslaved to liberated.

Boy Erased is admittedly a dramatic movie but it also carries a message of hope for young people from the LGBTQ community, desperate to be heard. Adapted from a memoir, it faithfully tells the story of Garrard Conley, who went through the experience of conversion therapy. He says today « Fourteen years have passed since my time in conversion therapy at Love in Action, yet the sights and sounds and textures of my experience there remain as vivid as ever ». Conley’s main goal with this movie was to give words of solidarity to those who have experienced or are experiencing this kind of programs. Indeed, in the United States, 36 states still don’t have laws against conversion therapy.

Podcast: Is your dream job to make jewellery?

The Boat Review : Welcome aboard