I recently got inspired by a dish containing chickpeas, celery and red cabbage. So I bought all these ingredients, but processed them in a whole new and healthy way. Serves 2. 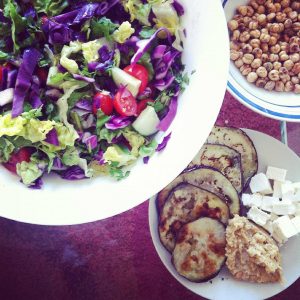 To start, slice your cabbage in half, then slice each half in half again to quarters. After that, cut the quarter you need for the salad into slices (not too thin, not too thick), and roughly chop it.

Same with the romaine lettuce, roughly chop the lettuce leaves.

Take the celery stalks and chop them, too. The pepper bell needs to be sliced into strips and then cut in thirds. Cut the cucumber into slices and then into quarters. Cut the cocktail tomatoes in halves.

For the fresh herbs, take whatever you prefer and roughly chop it.

Put everything in a big bowl. Add a vinaigrette of salt, pepper and olive oil and mix it. Put it aside.

Cut the aubergine into about half an inch slices. Take a non-stick pan. Add a little bit of olive oil and heat. As soon as the oil is hot, put the slices in and salt and pepper them. Take care that there is always enough oil in the pan so that it won’t burn. When you feel that one side is ready, turn the slices. When they are done, put them on a plate (if you feel they are too oily, put them on a kitchen roll first to lose some of the oil).

In the meanwhile take a little pan and heat it. Put the roasted chickpeas in it, salt them and roast until they are of a golden brown colour (adding salt and roasting them again gives an even better flavour). Put them in a little bowl to cool down a bit.

Take the goat cheese and cut it into quarters. Put it onto the plate with the eggplant slices. Add hummus to the plate for some more flavour.

You can eat the aubergine slices, goat cheese and hummus separately or mix it into the salad. The roasted chickpeas are for the topping.

Next Article
0
Monique Chambers September 15, 2014
No Comments Yet