Villa Bologna Pottery and Gardens is situated in Attard, 30 St Anthony street and is run by a lovely couple who have kept the family legacy and taken over the premises from the grandparents.

I got rather lost finding the street, as the area is called San Anton, and there seems to be thousands of other streets with a derivative of the name. The number 106 bus stops just outside and if driving, parking is easy.

First of all, I was shown round the potter’s atelier, which were previously stables. I was told the process of making pottery went through various stages. The first being the wheel and the modelling of the clay. Then you must cook it, glaze it, cook it again, then finally paint it. They had a couple of artists at work and I was told they were both mute and deaf. I found it so emotional how concentrated they were and what beautiful works of art they came up with. It was like they communicated through these wonderful designs. The various creations are exposed in a small shop at the front of the workshop where you can purchase them.

After being shown round the pottery atelier, I was led through a small door that came out onto what seemed like a vegetable patch inside the ruins of an ancient castle. I made my way down the path and at the end came into these sumptuous never ending gardens. I walked round for easily half an hour, discovering more and more things as I went along. There were a few fountains and the owner showed me through a gate where there was a huge fountain they had just renovated. The whole premises dated back to the XVIIth century and I have to say, for someone to own these gardens and houses was breathtaking to me. It almost seemed unreal how beautiful it was. The fact that night was falling made it even more magical as all the outside lighting was coming on. It was like walking round a fairytale garden.

I was told they often host wedding receptions here and I couldn’t help but think what a dream place it would be to do so. The plan is also to open these gardens to the public soon. 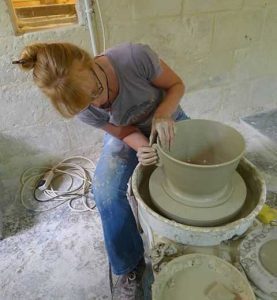 After having wondered round the outside bit, I went back into the pottery atelier to see what was going on. Everyone was having a go on the pottery wheel, I stood there fascinated at how easy it looked when the professional (Sue Mifsud) was doing it. When it came to be my turn and it wasn’t all that simple! The clay never goes in the direction you want it to, and you get covered with splats of the stuff! So wearing one of your best outfits is not a good idea, as I found out. There was a range of pots made by all the visitors and it was funny to see how every one of them had a different shape to the other. You could clearly see the amateur’s creations to the pros ones! There was a good atmosphere were everyone was laughing about how weird looking their creation was and a sort of contest was going on to see who would make the wonkiest pot.