Ħassle Mejjet Theatre Collective is currently in the process of putting together their latest production, Pandora. This performance will take place at the Teatru Manoel Studio Theatre in October. The collective is currently made up of four young adults aged 19 to 21, all of whom are training in the performing arts. Founders Gianluca Mifsud, Benjamin Abela and Brendon Thearle set-up Ħassle Mejjet in late 2017 and launched the collective in early 2018 as a platform where they can experiment and stage their own productions freely.
indulge sat down with Gianluca to find out more

What is Pandora about?
Pandora follows the story of our titular protagonist as she is introduced to a new way of life after bumping into a group of unconventional teenagers at her father’s bar. This precedes a number This precedes a number of unpredictable events which push Pandora out of her comfort zone and help her face her deepest secrets.

All in all, Pandora is a story of self-discovery. Living in a time where teenagers often grow up too fast as they try to catch up with whatever life throws at them, we believe Pandora’s story is particularly important. The plot sees our protagonist embarking on a journey of acceptance and growth – both universal themes – which is why we believe that this is a production that audiences both young and old will relate to.

What are the challenges of mounting a production in a marketplace that continues to grow?
As a group of relatively young theatre makers, producing an original piece in an actual theatre has been no easy feat. With the youngest member of Ħassle Mejjet being only 18, integrating into this ever-competitive market was quite the challenge. From severe budgetary constraints to dealing with unforeseen technical issues, we’ve had to work hard and together to get past some issues. These challenges have nonetheless prompted us to think outside the box and come up with new and innovative ways of overcoming such circumstances. We have sought to pursue our own, distinct style – and this came about by creating work that is different from what has been already done locally. It has also been vital to pinpoint what portion of Maltese theatregoers we wanted to target. With several different shows happening during our same weekend, it was vital that we targeted a portion of the Maltese population that we feel was, to a certain extent, ignored. This specific targeting came through in a number of ways; from the plot of the story itself to our marketing content and tactics. Despite the challenges that come with mounting a production, I believe that witnessing Maltese theatre audiences get bigger and becoming more selective of what sort of content to watch is nothing but a sign that this industry is slowly but surely taking off.

What are you hoping audiences will take away from this production?
I’d like our audience to think, question, and reminisce about what they would have witnessed. However, regardless of what the final result of our production is, I would like Pandora to encourage other young, budding artists, to take the leap with whatever work they might be unsure of. Having worked in the theatre scene for a considerable amount of time, it is especially frustrating to see other talented artists remain within the confines of their comfort zone as they constantly perfect whatever they might be working on. I’ve learnt that there will never be a point where you will be 100% confident of the content you might be putting out, but until you actually take the risk of putting it out there, you won’t really know where you stand. 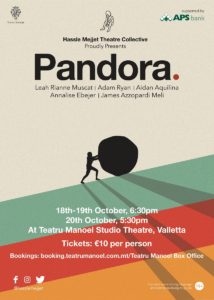 Pandora by Ħassle Mejjet will be performed at the Teatru Manoel Studio Theatre from the 18 – 20 October 2019. and tickets can be bought from here. For more information visit Pandora’s Facebook page.