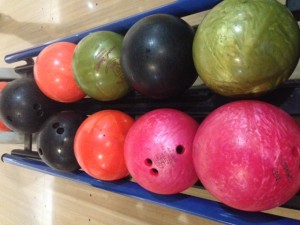 Last night, Rotary Club Malta organised a bowling evening which was held at Eden Superbowl. I hadn’t been bowling since the late 80’s, and indeed, it was at Eden; mostly because it was one of the few venues in those days with AC!

You could tell I haven’t kept up the practice, and though I didn’t get the lowest score, I was symmetrical to my partner who place the same number down from the top as I did from the bottom. But I had fun, and I didn’t break any nails, so the evening was judged a success.

The place itself could do with a bit of a facelift, but it was a Tuesday evening (in January) and all bar 2 lanes were busy, so not quite sure when they would be able to do a refurb.

Plenty of staff are on hand to serve food you’d expect in a bowling alley – and charming bar personnel were on hand to clear the three team’s drinks away and keep us topped up. I’m glad they did as at one point, I managed to fall having released my ball with gusto, on to my knees, and it’s not till now I could feel any pain.

Rotary ‘Hands On’ Day gets help from EDEN

Roll up your sleeves for charity