Showing exclusively at the Eden Cinemas on the 27th October at 20:15 is Giuseppe Verdi’s exceptional opera, I Due Foscari. Broadcast live from the Royal Opera House in Covent Garden, the acclaimed staging of this new production is brought to life by American director Thaddeus Strassberger, who makes his Royal Opera debut in the 2014/15 season. Starring in Verdi’s tragedy of love versus duty is the renowned baritone Plácido Domingo who plays the role of Francesco Foscari. Conducted by Antonio Pappano and featuring the Royal Opera Chorus and the Orchestra of the Royal Opera House, I Due Foscari is a taut and sombre drama which provides the basis for one of Verdi’s most arresting early scores, which hasn’t been heard at the Royal Opera House in almost a decade! 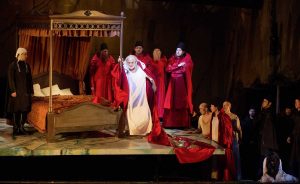 I Due Foscari is based on a play by Byron, set in 15th century Venice. The story revolves around the city’s Doge, Francesco Foscari and his son Jacopo, who has been brought back from exile to face charges of treason. Jacopo is innocent, but neither the pleas of his wife, nor those of his powerful father are enough to save Jacopo from condemnation.

Adding further intensity to Verdi’s magnificent score is the enhanced sound and dimmed theatre lighting in Eden Cinemas’ multipurpose theatre, which provides that authentic feel, as though watching the production from the Royal Opera House. Ensuring that the evening is a truly remarkable experience, the audience pays just a fraction of that charged overseas for theatre tickets.

Tickets for I Due Foscari are priced at €23 per adult and a mere €10 for children aged 16 and under. Making the evening a night to remember, the audience is offered a complimentary glass of wine, complimentary parking and a 25% discount at Waterbiscuit upon presentation of their ticket. Various season specials and discounts are also being offered from the box office, including a 15% discount with the purchase of six performances. Special discounts for school bookings are also being offered.

This event is sponsored by 35 South and Waterbiscuit
For more information and to purchase tickets visit www.edenculture.com.mt.