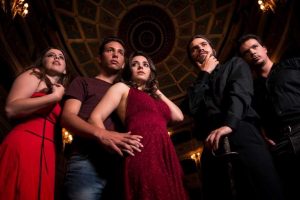 Ever since Teatru Manoel was built, there have been rumours about what mysteries may be concealed in the damp darkness beneath the surface.

This original play by award winning playwright Malcolm Galea will be exploring this question as it delves into the subterranean depths under the Manoel stage and unearths a dark secret that has been lying dormant for centuries.

The winner of the Francis Ebejer Playwriting Award (Plays for Young People Category) in 2012, ‘Id-Dlam taħt it-Teatru’ tells the story of Sabrina, a sixteen-year-old girl whose curiosity and loneliness get the better of her, causing her to stray where she shouldn’t have gone and come face to face with what shouldn’t have existed.
Starring an exciting cast including Philip Leone-Ganado, Naomi Said, Karen Decelis, Kris Spiteri and Joseph Zammit, this play will capture your imagination and make you see the Manoel Theatre and all of Valletta in a new dark light. ‘Id-Dlam taħt it-Teatru’ is ideal for all ages and will run at the Manoel Theatre on the 17th and 18th of May at 7pm. The play is being produced by More or Less Theatre, Teatru Manoel, and the MCCA.
More information and tickets may be acquired from teatrumanoel.com.mt.

I hate this time of year