With the winter break fast approaching, young travellers will have more entertainment choices than ever, thanks to Emirates. 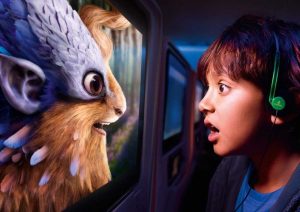 The airline announced it will boost the children’s content on its award-winning in-flight entertainment system, ice Digital Widescreen (information, communication, entertainment) in time for the busy travel season.

From new release movies and Disney classics to a massive selection of TV programmes, December will be a great month to fly Emirates with the family.

Children on an Emirates flight in December have more than 50 hours of kid-friendly TV waiting for them. New features on ice Digital Widescreen include Nickelodeon featuring Bubble Guppies, Spongebob and Team Umizoomi, plus new and updated channels dedicated to Thomas & Friends, Dora the Explorer, Mickey Mouse Clubhouse, Austin & Ally, and The Gruffalo. This is in addition to the BBC’s CBeebies, pre-school channel Disney Jr., Cartoon Network and over 15 channels of top children’s television.

ice Digital Widescreen’s movie line-up is also guaranteed to keep just about any child occupied with new releases for kids headed up by Despicable Me 2 and the smash hit, One Direction: This is Us, just two of 15 recent movies that children will love including The Smurfs 2, Planes, and The Croods. Many of these movies are available in up to seven different languages and close to half offer closed captions for the hard of hearing.

New movies are backed up with an awesome selection of 40 Disney Classics: movies parents will love introducing to their kids. All-time favourites such as 101 Dalmatians, Cinderella and Mary Poppins are always popular onboard as are “modern classics” like Cars, Toy Story, and all four Pirates of the Caribbean movies.

“We want getting there to be half the fun, and the flight on Emirates to be the part that everyone in the family looks forward to. Having a great entertainment line-up for kids also helps alleviate some of the travel stress from the parents, so they can relax and enjoy the flight,” said Patrick Brannelly, Emirates’ Vice President Corporate Communications Product, Publishing, Digital & Events.

He added: “Emirates pioneered inflight children’s entertainment with the launch of a dedicated children’s TV channel back in 1992, and the introduction of a huge selection of Disney movies in 2003. We aim to continue raising the bar in this regard and look holistically at the whole entertainment offering such as the variety of games to play, music to listen to, kids activity packs and the newest members of the Emirates family: the Fly With Me Monsters.”

Each month Emirates reviews its entertainment to deliver the latest and best movies, television, audio and games from around the world. With more than 1,600 channels in 30 languages, ice Digital Widescreen ensures passengers of all ages are spoiled for choice.

Emirates operates four scheduled flights weekly from Malta to Dubai via Larnaka, Cyprus, on Mondays, Wednesdays, Fridays and Saturdays. While on Sundays, Tuesdays, and Thursdays, Emirates operates direct flights from Dubai to Malta and return flights fly via Tripoli.