After a run of spectacular musicals and pantos, FM Theatre Productions are scaling things back with Sunrise, the critically-acclaimed one-woman comedy penned by Harry Potter actor Jessie Cave. It will be performed in the intimate setting of The Splendid in Valletta from Friday 14 February. The women behind Sunrise, actor Rebecca Camilleri and director Chiara Hyzler, took some time out to answer a few questions for indulge.

First of all, please introduce yourselves.

Chiara Hyzler (CH): I wear several hats within the theatre industry; as an actor mostly known for my various Panto roles and as a producer and as a director for productions such as The Prime of Miss Jean Brodie (MADC) and US/THEM (The Shrinking Violets)

What inspired you both to work in the theatre?

RC: I’ve been involved in theatre for as long as I can remember. I’ve always been drawn to stories and the magic that theatre provides. Then, in 2017, I made the jump and moved to London to pursue my Masters in Acting at ArtsEd and have been working professionally as an actor ever since.

CH: Once I set foot on stage, I realised it was where I belonged and there hasn’t been any other job that has come close to the joy and satisfaction that the stage life gives me. I then developed a huge interest in directing, which, when coupled with my need to stimulate discussion on certain topics, inspired me to create edgy productions that are relevant and bold.

If you were not theatre practitioners, what would you both be doing?

RC: I technically have a Law degree, so I should probably say something to do with Law, but realistically I think I would have still found myself in the creative industry somehow.

CH: As much as I love theatre, it does steal family time and just general free time a lot. So I think if I wasn’t involved in theatre, I would be travelling much more and simply spending more time with my family.

Tell us a little bit about Sunrise.

RC: I’ll be playing the role of Jessie in Sunrise. The play is a first-hand account of her experience getting back on her feet after a really significant relationship in her life. Coming to terms with the breakup, working on herself, getting herself to the gym, dating again, being a bit of a hot mess and finding closure (All while still taking care of two young kids). She is hilariously honest and it has just been so much fun getting to play her.

CH: It’s a funny and touching piece about heartbreak and a woman trying her best to navigate through life as a single mother of two.

Why should people come to watch it?

RC: Apart from the fact that the script is really funny, I think it’s extremely relatable. Anyone who has been through a hard time, a break-up, or has simply been on a first date at some point, will find something that they can latch onto.

CH: It is definitely relatable and highly relevant. Everyone in the audience will find a moment in the story where they can say “Oh boy, yes I did that!” and crawl under their seat. So it will be an evening where we can all just laugh at the silly things that our emotions (and exes) push us to do!

RC: I do love having a good Wagamama takeaway or some sushi by the TV. I also love watching rubbish YouTube videos, they just switch my brain off. Also, wine. Definitely wine. 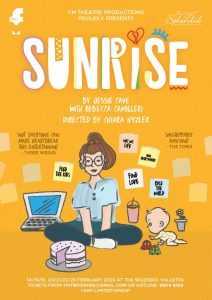 Sunrise by Jessie Cave will be staged by FM Theatre Productions on 14, 15, 16 and 20, 21, 22, 23 February 2020 at The Splendid, 74 Triq id- Dejqa, Valletta. This production is suitable for audiences aged 18 years or over. To book tickets email fmtbooking@gmail.com or call the ticket hotline on 99048169. More information may be found online at www.fmtheatre.com.