White dresses are everywhere this season. Whilst they’ve always been a classic, Summer 2022 has seen all lengths and styles from the catwalk to the high street. Whether it’s a prairie dress in crisp cotton or a satin mini, you can’t miss the block-coloured beauties out and about in the city, beach and bar.

The Western trend is still in full swing, which means that puff sleeves and a loose fit are big at the moment. Whether you pair them with cowboy boots or cool trainers is up to you. On the other end of the scale, the strappy, minimal 90s look is going nowhere, taking cues from early Calvin Klein and better suited for evening wear.

The white dress has had its fair share of movie screen time over the years, from Grease’s Sandy at the school dance to Cher Horowitz in Clueless, and that racy scene starring Sharon Stone in Basic Instict. Up there with the greats has to be villainous vixen Meridith Blake’s sharp white dress in the Parent Trap, which we all secretly envied.

In our last two Indulge Vintage Style Icon Series, the white dress also gets a mention on both Marylin Monroe and Blondie’s Debbie Harry. Here are ten more of our favourites, some lesser known, as worn by celebrities over the past thirty years. 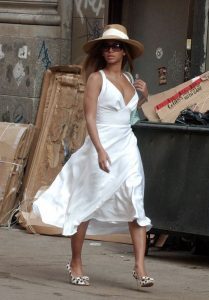 Remember Beyoncé in the Pink Panther Movie? No? Neither do we. What we will remember, however, is this glorious dress. The wrap effect is seriously flattering and conceals where it needs to, and paired with those polkadot heels and a wide brimmed sunhat, the star’s onto a winning formula. 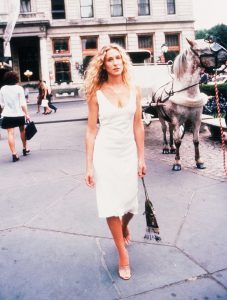 Oh Carrie, Carrie, Carrie. How we adore you. This quintessentially late-nineties shift dress is a classic from early Sex And The City. Paired with a beaded bag – also hugely trendy back then – it’s perfect for hailing cabs and walking around Central Park on balmy New York evenings. 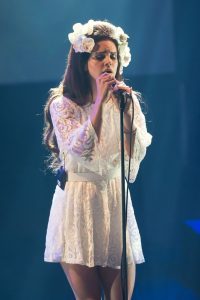 Lana Del Rey on stage in a retro lacy number inspired a million sultry teens in flower crowns. With big hair and even bigger bee-stung lips, she keeps her vintage inspired white dress short and flippy, adding full false eyelashes and white orchids to her ‘do to achieve a 1960s bridal aesthetic. 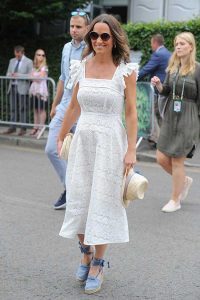 Pippa Middleton’s most memorable white dress moment has to be the bridesmaid’s dress that she wore for her sister Kate, The Duchess of Cambridge’s wedding in 2011, yet we love this broderie anglaise maternity frock all the same. It’s just so gloriously English. 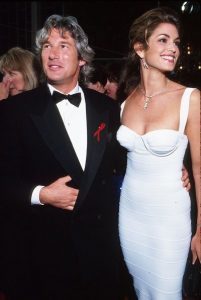 Cindy Crawford was doing the Hervé Léger bodycon bandage dress way before its huge resurgence in 2008. Pictured here at the Oscars, Crawford and her then boyfriend Richard Gere were the toast of Hollywood. She’s the epitome of the 90s Supermodel look. 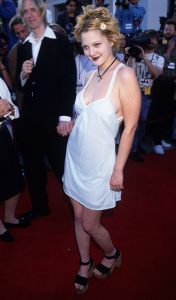 Drew Barrymore was quite the enfant terrible in the early nineties. Pictured here on the red carpet in 1993, Barrymore looks mischievous in a satin babydoll dress. She adds a white daisy in her rooty hair to go with her black choker and chunky cork heels. 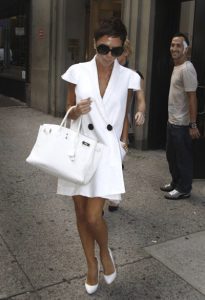 Queen VB’s seen out and about in LA wearing a double-breasted sleeveless blazer dress in 2008. Victoria knows how to do chic, and paired with white stilettos, black sunglasses and an iconic Hermès Birkin bag, this look was peak sophistication then and now. 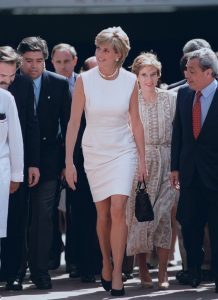 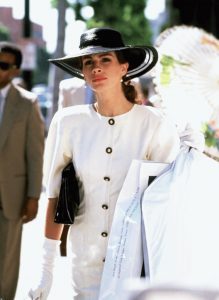 Who can forget the scene in ‘Pretty Woman’ where call-girl Vivienne goes shopping? Julia Roberts’ character underwent an incredible makeover, and she stuns in this memorable button-down dress as she walks down Beverly Hills’ Rodeo Drive. 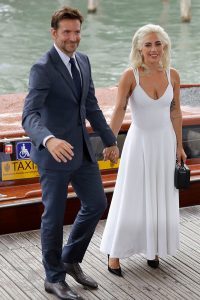 Gaga like you’ve never seen her before. The best part of dressing a certain way is that when you switch up your look, jaws drop! That’s the case here when the actress and singer arrived in Venice for the premier of ‘A Star Is Born’. This cut is perfection.

Remember to check out layerofluxury.com if your dress is see through or clingy! Nude silk slips and cami and shorts sets will make you look a million dollars!

The most unwelcome guest at the table

There’s Nothing More Chic! 6 Of Our Favourite Celebrity Black Swimsuits Over The Years