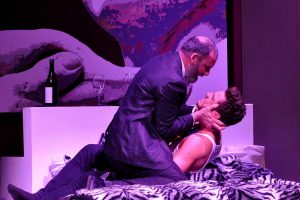 This season’s biggest Maltese drama success returns to the Manoel for two performances on the 24th and 25th of May. Booking has already started and is already well under way for the two shows which will close the National Theatre’s drama season. Simon Bartolo’s controversial original Maltese play “Jiena Nħobb, Inti Tħobb” is even more topical now, two months after it sold out and played to packed audiences at the national theatre.

The stellar cast includes a myriad of well-known faces such as Ray Calleja, Clare Aguis, Davide Tucci and Peppi Azzopardi and theatre stalwarts such as Victor Debono, Roderick Vassallo, Sharon Bezzina, Marilu’ Vella, Karl Cassar and Edmond Vassallo. “It is special to have the opportunity to work on such a great project with such a splendid team, all over again. This play seems to to have appealed to the Maltese audience like nothing else this season.” said director Sean Buhagiar.

“Jiena Nħobb, Inti Tħobb” has been one of the biggest successes for Maltese Theatre at the Manoel in this last decade. The play deals with the topical issue of gay relationships and adoptions and its powerful, emotionally charged scenes as well as comic moments have had audiences in fits of laughter at one moment, and in tears the next. The play is expected to sell-out again.

The play takes on Saturday 24th and Sunday 25th May at 8pm. Booking at the Teatru Manoel is open. The play is certified 16+ since it contains nudity, coarse language and adult themes.