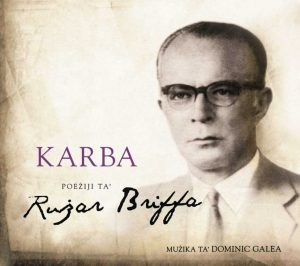 The musico-literary evening, under the distinguished patronage of the President Dr George Abela, was jointly organised by the Office of the President, Akkademja tal-Malti, the Department of Maltese of the University of Malta and Għaqda tal-Malti – Università. The latter student organisation was founded by Briffa and his literary friend Ġużè Bonnici in 1931.

The launch of “Karba’ coincides with Briffa’s 50th anniversary of his death on 22 February 1963 and with the 10th anniversary of Heritage Records label. The album includes a 16-page booklet with an introduction by Professor Oliver Friggieri, who in 1984 released Rużar Briffa’s biography.

‘Karba’ was recorded ‘live’ at Manolito Galea’s Lito’s Place in Floriana by various musicians including a string quartet led by Tatjana Chircop. The album was produced by Dominic and Manolito Galea together with researcher Steve Borg.

Styleaholic explores the economy of the world of fashion